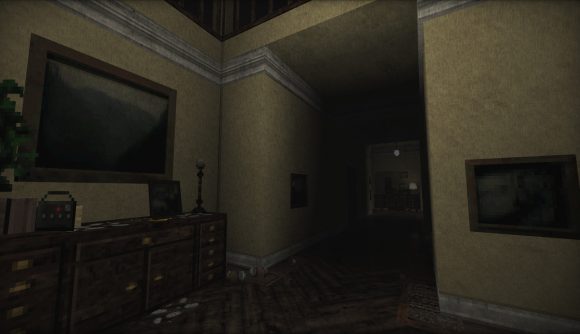 Since nobody on PC has had access to P.T., the playable teaser for Hideo Kojima’s since-cancelled Silent Hills, modders have been filling the demand. The latest version of P.T. to grace your screen – in a manner of speaking – is a total conversion mod of Doom that captures the whole thing.

Named GZ P.T., the mod transforms the FPS game into the haunted house psychological nightmare of Kojima’s short horror game. In P.T., you completed laps of a single hallway amid disturbing sounds and visions, doing small tasks and puzzles that unlocked the next section. Each stage, as it were, is the same hallways redecorated, giving you more clues as to whose house it is, and slowly hear about the family that lived there. It’s a dark, sordid, miserable horror game, fitting that it was designed as the prelude to Silent Hills, a new Silent hill from hideo Kojima and Guillermo Del Toro.

This version by Andrea Gori is almost creepier, trading realism for a discomforting 2.5D aesthetic. As the name implies, this is done using GZDoom, which it needs to run. All the main stuff is here, from the crying baby and endless radio chatter, to the morbid contents of the sink, and the phantom, Lisa, that angrily pursues you. Some puzzles, like the bit where you’ve to breathe into a microphone, have been changed to a more conventional control scheme. The way the lo-fi textures and assets turn everything into pixelated distortions up close makes it seem like the whole place is turning into a fuzzy mess in real-time, a Lynchian breakdown in slow motion.

Among the waves and waves of Doom mods, total conversions continue to be among the most ambitious. Here’s one based on Star Trek, or a remake of Resident Evil 2, or how about Doom 2 crossed over Warhammer 40,000? The options are many.

You can watch a trailer below:

If this isn’t enough, you can try P.T. in VR with this Half-Life: Alyx mod. You can download GZ P.T. for yourself on Gori’s Itch page here. As always, mod with caution.