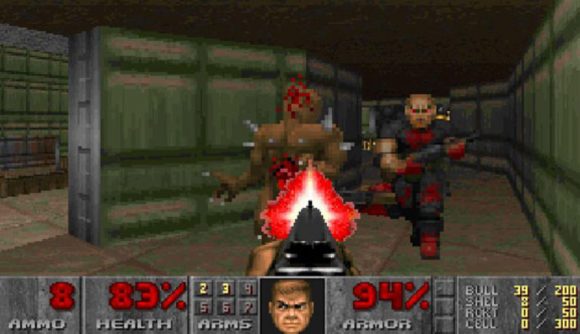 It looks like retro shooter Doom has got a new port – sort of. It appears that one creative player has managed to get id Software’s 1996 FPS working on a pretty unlikely piece of kit – a McDonald’s cash register.

As reported by Kotaku, a 19 year old videogamer called Ryan Edgar has posted screenshots of his achievement on Twitter, announcing triumphantly, “Ladies and Gentlemen, I give you DOOM… Running on a McDonald’s cash register.” The site reports that he was allowed to keep an old cash register, which was still operating with Windows XP, after visiting a branch of the fast food chain as they were replacing them with newer models, and then got Doom running on it by copying ZDoom over onto a USB stick.

Edgar told Kotaku Australia via DM that he “downloaded ZDOOM (Doom XP) on it using my personal computer, plugged it into the USB in the cash register, and ran it through there with auto run,” even managing to get a keyboard and mouse working alongside it by using a USB splitter.

If you’re keen to see the results of Edgar’s efforts, check out his tweet with – sure enough – Doom running on the register below.

I give you DOOM

Edgar further explained that he “was able to run explorer.exe by doing Ctrl-Alt-Del to get to Task Manager” on the register, but then discovered that “there was some weird encryption on it.” But, it looks like he’s now got it running just fine, and might have plans to try out other games in the future, too – he told the site that he might try to run Sonic Adventure 2 on it at some point.

So, that’s one game you can get running on an old McDonald’s cash register. It’ll be interesting to see if players are inspired to get some other classic titles running on the little computer.