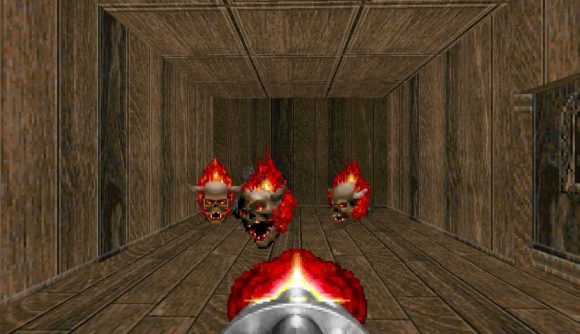 In the gaming and tech community’s collective journey to port Doom to absolutely anything with a screen, a pregnancy test has been added to the list. Through some clever retooling and rejigging of the device’s hardware, play the FPS game instead of wondering if you might be pregnant.

The contraption was created by hardware wizard Foone, who posted a thread on Twitter of their experiments on an off-the-shelf pregnancy test that eventually landed on whether or not it could play the demon-shooting classic. At first, Foone simply got a video of Doom playing on the test, but now the old PC game is fully playable, as seen in the tweet below.

There is a lot of cheating going on here – the screen has been switched out because the standard one can only display a set of symbols aligning with test results, and it’s hooked up to a PC as a power source and way of switching what plays. But the visual of a level of Doom happening on an LED screen housed in a pregnancy test is hilarious, and has no doubt set off any number of tech-savvy fans to see if something actually playable using the device’s limited buttons and assets isn’t possible. Here’s hoping Dwayne ‘The Rock’ Johnson returns for the ensuing adaptation, Womb Eternal.

Apparently Foone plans to put together a how-to guide so you can mod your own programmable pregnancy test, and is currently working out how to make use of the pee sensor as an input. It is, however, gonna be tough to put together enough input options to play Doom without an outside connection. After all, “a keyboard is gonna be very limited and kinda disgusting. You can only type one letter, and to get it, you have to pee on it”.

Yesterday I had a lot of retweets and reddit posts and such for playing Doom on a pregnancy test.
But as I explained then, it wasn't really PLAYING on a pregnancy test, it was just a video being played back, not an interactive game.

Well, now it is. It's Pregnancy Test Doom! pic.twitter.com/Nrjyq07EVv

Last year, someone managed to get Doom running – actually running – on a McDonald’s cash register. Not long ago, Foone inspired someone to build a PC in Minecraft, that lets you play Minecraft in Minecraft. Say that three times fast.

Doom, and its immediate sequel Doom 2, received an update this week, introducing Ultra-Violence+ mode. Doom Eternal‘s first DLC, The Ancient Gods, Part One, will be stand-alone, and is coming out on October 20.