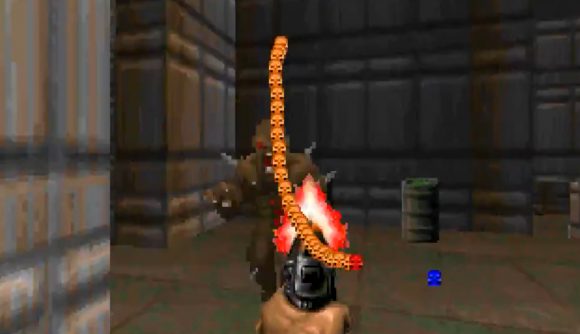 Just when videogame writers on slow news days seem to have all the answers, Doom modders will change the question. And like the late, great Roddy Piper once suggested, the question has indeed been changed, from ‘can it run Doom?’ to ‘can Doom run it?’ Now that one programmer has gotten Snake running inside Doom, the answer is an emphatic yes.

A custom save file from developer kgsws lets you run Snake in The Ultimate Doom, controlling the snake (here made up of skulls, which is especially metal) by steering it around the screen like a car. Now, you have to ask ‘what’s next?’ Are we gonna start running Pac-Man or Super Mario Bros in Doom? Will Doom soon be able to run Doom?

Maybe so, actually. The exciting bit about this isn’t just that Snake is running here – it’s that kgsws has found an exploit using these custom save files to run arbitrary code within Doom, as Vice reports. Doom has already been broken wide-open with various ports of its source code, but this exploit allows for much more robust changes to the original DOS version.

You can see it in action below, or download it for yourself on Github.

Look at that! An arbitrary code execution exploit has been found in original DOOM! (Ultimate DOOM 1.9 here) Check out this game of snake that gets enabled by loading a save game! #DOSGaminghttps://t.co/OYHXcd6X7G pic.twitter.com/RsA728a4RD

If you’ve missed out on the latest ‘can it run Doom’ reports, it’s been made to run on a digital camera, a Sega Genesis, and a fake version of Windows. We’re also pretty sure we could run it on 16 billion crabs, but we haven’t found 16 billion crabs with a VGA port yet. The most classic of FPS games will live forever, it seems.