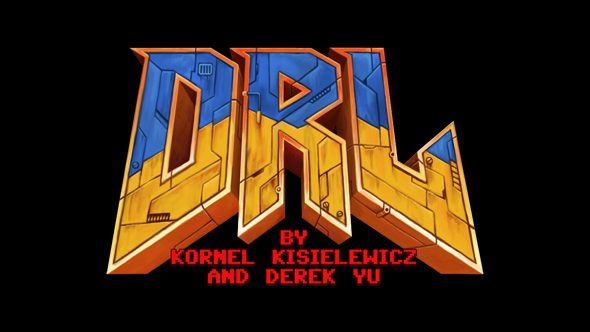 Update December 8, 2016: After receiving warnings of legal action from Zenimax the creator of DoomRL has rebranded the roguelike as DRL and made it open source.

For more small team gems, check our list of the best indie games.

Zenimax initially ordered co-creator Kornel Kisielewicz to take down all Zenimax-owned trademarks used in the game and website. That explains why the website now features almost no references to Doom, or DoomRL. The game’s source-code has also been made available to the public via Github, which Kisielewicz addressed on Twitter: “I planned to release the source code of DoomRL as a ‘thank you’ after a successful Jupiter Hell Kickstarter, but ZeniMax forced my hand.”

Original story December 3, 2016: ZeniMax have threatened legal action against the creator of DoomRL – a free roguelike fan game based on Doom that was released 12 years ago – for unauthorised use of their trademarks. It’s looking likely that the game will have to be taken down after all this time.

Creator Kornel Kisielewicz took to Twitter to show the letter from ZeniMax, who demand that all of their trademarks be removed from the game’s website, including any key words, media or meta tags. Here’s the tweet:

So… Zenimax have just written to me demanding I take down the DoomRL site… :-/ pic.twitter.com/tXAwdq59Zz

While it’s possible the game could be reworked, Kisielewicz says doing so would be a substantial undertaking. “The whole thing isn’t that easy,” he said in a tweet. “Replace monster names? Sprites?” Spelunky creator Derek Yu even helped create some of those sprites.

The free game actually predates ZeniMax acquiring id Software by over six years, and the letter stings even more since Brutal Doom 64 – a fan mod – was just honoured at The Game Awards, with the blessing of the company. Still, it looks like Kisielewicz is powerless to do anything, unless public outcry makes ZeniMax reconsider their stance, of course.

“We’ll fight, but chances are slim,” Kisielewicz said in another post. “DoomRL is illegal.”

It’s confusing why ZeniMax chose to wait until now to do anything, though some are wondering if it’s linked toKisielewicz’s recently launched Kickstarter –Jupiter Hell, a spiritual successor to DoomRL, albeit without the tie to the brand. This means money is now involved, even if it’s not directly from DoomRL – the Kickstarter for Jupiter Hell is being promoted on the DoomRL site, after all.

We’ve reached out to a ZeniMax representative for comment and will update if we hear back.