Today Valve have updated the website for their annual International tournament with details on prize payouts, tournament structure and a new streaming service. The main event is running August 3rd through 8th and features the world’s best Dota 2 teams battling out for fame, glory and an ever-increasing combined prize pool of nearly seventeen million dollars. Preliminary events have been running throughout the year to choose the teams and there are still more to go.

First things first, the wild card matches will run on Sunday 26th July while the round robin group stage takes place over the following four days, culminating on Thursday 30th. We’ll break for the weekend then return for the start of the main double elimination bracket on Monday 3rd.

The wild card matches will run as a four team double elimination bracket, with the team that goes 2-0 advancing to the group stage along with the winner of the losers final. CDEC Gaming, Team Archon, MVP Phoenix and Vega Squadron are the teams participating here.

The group stage will be ran as a series of best of two matches across two eight-team groups. “But that doesn’t…” I hear you cry. Yeah, it’s a system that originated in Chinese DOTA and has spread into common usage throughout competitive MOBAs, with various League of Legends tournaments opting for it as well. If you win both games, you get 3 points. A draw is 1 point, while losing is 0. It allows teams that dominate to be rewarded without totally screwing over teams that have one bad game and manages to keep tournament organisers happy by making matches more predictable in length. 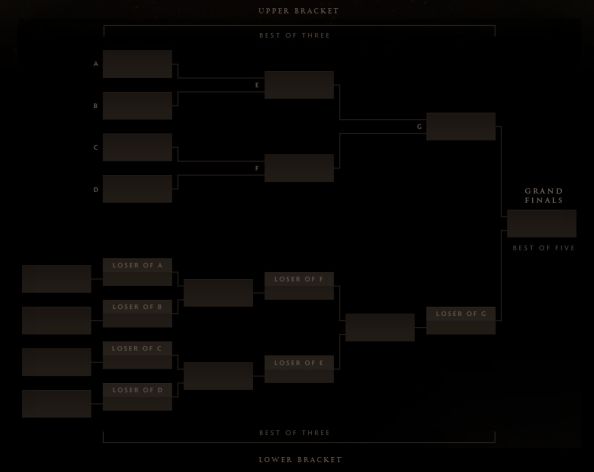 Once that’s all done with, the top half of each group will advance to the winners bracket of the double elimination tournament, while the bottom halves will face each other in best-of-ones to determine who progresses to the loser’s bracket. It’s slightly odd that winning zero matches at the group stage won’t actually eliminate a team, and that they’ll then have the possibility of spiking a game to get rid of another team, but it should at least lead to some excitement. The bracket will then be played as best of threes all the way up to Grand Finals, which will be a best of five with no advantage give to the team that goes through the winner’s bracket undefeated.

This is an odd choice that helps to avoid disappointing finals but does seem to miss the point of a double elimination bracket. Still, it’s worked for the tournament in the past and not having boring finals is very key to e-sports. It had a lot of problems, but StarCraft II’s six months of sweeps in finals for its major tournaments definitely did not help its development in earlier years.

The prize structure is worthy of praise. I don’t like focusing on how much teams can earn from tournaments as it just isn’t what this should be about – when was the last time, half way through the World Cup final, you found out how much the winning team got for it? – but the distribution this year is of note. According to some quick reddit math it’s much more friendly to lower placing teams than previously, while the winners will still be bagging over six million. In a world where the majority of teams still aren’t properly salaried, this is important for the continued growth of the game.

Lastly, Valve unveiled the watch panel of the website. It integrates with the mostly ignored Steam broadcasting to show Dota games. Beyond that, however, it also provides customisable stats, a game timeline and a minimap. Essentially it’s all the features of the in-game spectator client in your browser. This is fantastic and will very likely be what I use to stream the event unless Twitch proves more stable. It’s still in beta (what that Valve makes isn’t?) and certainly needs some rethinking on the layout front – it looks fine until you get rid of the chat window that you will never want open anyway – but unless the servers topple, should be a roaring success.

We’ll have more coverage of The International as it unfolds. Here’s the scoop on last year’s tournament. For info on teams and players, I recommend Liquidpedia.