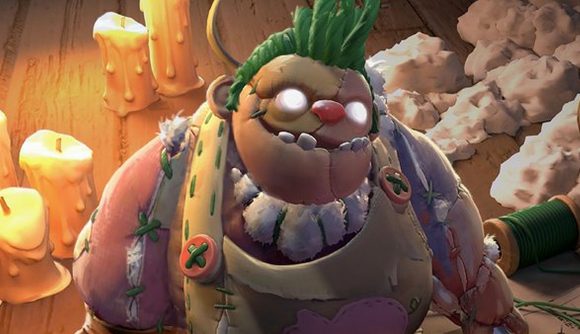 Following the launch of the Dota 2 International 10 Collector’s Cache Volume II earlier this week, another content drop for the MOBA game’s battle pass has arrived in-game. A brand-new persona has arrived for a certain Meat Hook-wielding Hero – complete with a new character model and VO – along with a new announcer pack tying into the upcoming tournament.

The new Dota 2 persona pack is for lucky Hero Pudge, and re-imagines him as ‘The Toy Butcher’. It’s pretty close to the concept art for the skin Valve revealed along with the battle pass itself earlier this year, though there are a couple of key changes in the character model, which really bring Pudge’s spooky persona as a barely-stitched together doll on a mission to life. His spray of lurid green hair is intact, though it’s now a bundle of fibrous ragdoll hair atop Pudge’s puckered, glaring face. Gulp.

Requirements for picking up the new persona pack are pretty high – you’ll need to reach level 255 – but it does include “an all-new model, animations, and voice performance”, Valve announces.

“Feared amongst the fluff-stuffed denizens of the toy box,” Pudge’s persona description says, “The Toy Butcher stalks the corners and shadows of the bin, always on the hunt for his next kill. Every toy knows that once the butcher gets his hook in you, your stuffing and your life are forfeit – like as not to be left strewn about the lanes as the plushy monster jaunts happily away from your lonely, ragged remains.” Shudder.

The Toy Butcher Hero Persona for Pudge and Voice of The International Announcer Pack are now available — https://t.co/jcscB2W0D8 pic.twitter.com/9lRSxrf6GY

In addition to the new skin is the new Voice of The International announcer pack, which you can scoop up at a lower level – 75. Sweet.

If you’re a Pudge fan or keen to put the new announcer voice into action, you can start earning them right away. They’re available for Dota 2 battle pass owners as of today, August 21, so go get levelling up.