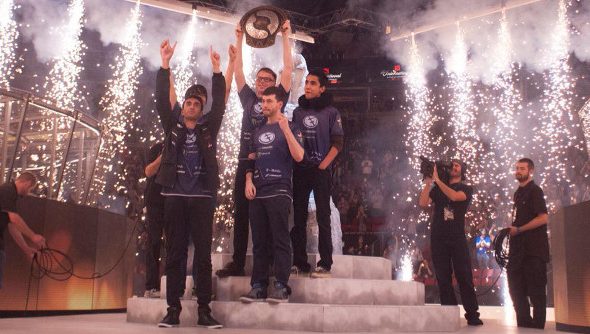 In yesterday’s report on The International, I said that we could only hope that the remaining teams at The International had a few tricks left up their sleeves, or the last games would be foregone conclusions. Fortunately, LGD, CDEC, and Evil Geniuses all showed up with some surprises. But nobody was as surprising as the new 2015 International champion, Evil Geniuses.

Match of the Day: EG vs. CDEC

There wasn’t a dull moment on the last day of The International. Evil Geniuses played brilliant games that showed their strengths at every aspect of the game, from hero pools for each player to drafting to farming to fighting. But it wouldn’t have been half as much fun watching them win if they hadn’t had such good opponents throughout this final day.

Yet it was the Grand Final against CDEC that drew out the best of EG. Sumail’s Storm Spirit weathered an onslaught of ganks yet somehow ended up ahead on farm anyway and left the rest of his team free to start going to work on CDEC. As EG started to hit a power-spike in the mid-game, CDEC torn to pieces. It established a problem that CDEC were never able to solve: they could either shut-down SumaiL and let Fear and UNiVeRsE start taking over the map, or they could try and contain Fear and UNiVeRsE and leave Sumail to get out of control.

A poor draft from EG in the second game let CDEC back into the series, as EG gave up Leshrac and then CDEC picked a Broodmother into Sumail’s Windranger. The mid-lane Broodmother seemed to throw EG off their game and they never really found their footing against CDEC, who took a fairly smooth win over an EG that sometimes seemed too desperate to make plays.

Yet EG refused to be afraid of Leshrac, arguably the single strongest hero in the game, and leaving him open for CDEC baited them into picking him again and again. CDEC got the hero again in Game 3, but this time EG were able to get control of themselves, start playing a little more cautiously, and start taking control of the match. They also started respecting CDEC’s use of Smoke of Deceit a bit more, and would pull back from any vulnerable locations when they realized they’d lost track of CDEC, which shut down CDEC’s ganking game and let EG regain the initiative.

With their tournament lives on the line, CDEC opted for a different kind of lineup in game 4, ditching Leshrac for a Dragon Knight… but at the cost of giving EG their dream draft. Sumail was back on Storm Spirit. UNiVeRsE had Earthshaker, and Fear had Gryrocopter, And just to make sure EG could control every engagement, ppd was on Ancient Apparition while Aui was on Naga Siren.

CDEC held their own despite the strength of EG’s lineup, yet didn’t quite give it the respect it deserved. It all led to the single greatest moment of the Grand Final, where CDEC’s International dreams slipped away in the space of a few ill-chosen seconds.

Seriously, watch that again. Don’t watch the animations, just look at the health bars for CDEC after they star that Roshan. That’s how quickly CDEC lost The International.

CDEC’s last-minute annihilation in Game 4 of the final was hardly the only throw of the day. LGD’s Lei “MMY” Zengrong went from hero to zero in the space of his second game against EG. After making one of the most astonishing clutch Rubick plays of the tournament, he threw away LGD’s rally by over-pursuing EG on the back of a great team fight for LGD.

He tunnel-visioned on EG’s ppd and chased him deep into the Radiant jungle alone, where he got sniped by Aui and let EG turn the entire game as they rushed back to Dire side and killed off the rest of LGD. MMY’s over-eagerness caused a gold swing north of 10,000 by the end of the fight, and guaranteed that LGD would have to settle for third.

EG’s Saahil “UNiVeRsE” Arora played like a legend on this final day of The International, with some of the coldest and calmest moves of the tournament. Look at this escape from an LGD gank.

That pretty much summed up his night. He was managing every engagement down to the last microsecond and the last hitpoint.

A great night of Dota ended with a some regrettable moments. The Evil Geniuses team themselves, despite having given North America its biggest tournament win ever in eSports, proved to be one of the least animated and charismatic groups of people in professional gaming. It was like the booth opened and five Smokin’ Jay Cutlers stepped out.

Fear later explained that everyone was exhausted and wanted to go home, but still…

it was a huge moment that everyone wanted to share, and Evil Geniuses kind of poured cold water all over it. It’s one thing to seem overcome or speechless in the face of a huge event, but EG’s collective “meh” was utterly deflating.

An inscrutable performance from Deadmau5 didn’t help matters. No sooner had EG shrugged their way off the stage than a hyped up crowd was being treated to some of chillest house music this side of a W Hotel bar at 8 AM. Then the Canadian started playing Avicii’s “Levels” and cut the the music off mid-track, and ran from the stage flapping his arms.

It was a strange way to finish crowning a world champion. 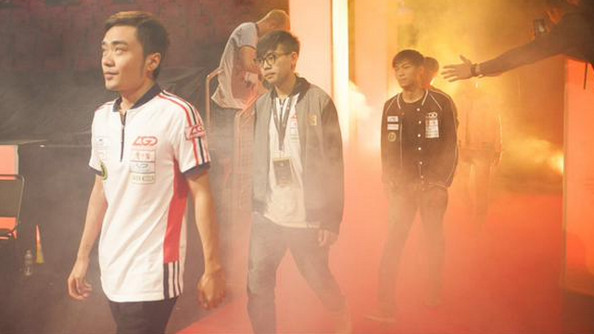 That does it for the 2015 International and the 2014-15 Dota season that revolved around it. The next time Valve hosts one of these, it should be a new era for Dota 2. The Dota Majors series promises to reshape the Dota calendar and hopefully make it easier for casual fans to follow the game, as well as give teams more reasons to stay together between Internationals.

But more importantly, this tournament seemed to mark a changing of the guard. China, always the strongest overall region at these tournaments, had another terrific showing, but the twist was that it was the upstart CDEC team that turned in the best performance, followed by a retooled LGD squad, while many of the giants of Chinese Dota came up short.

Alliance weren’t even there. Team Secret were a bit of a disappointment despite their star lineup, Na’Vi were eliminated at the start… and in the end, it was a North American team of veterans and a star Pakistani rookie who broke China’s grip on this tournament and gave North America its greatest victory in eSports to date.

Will that change things? Will North America finally have a MOBA scene it can be proud of, and will the next year of pro Dota feature more North American teams following in EG’s footsteps, more Korean teams traveling the path that MVP blazed these last years, and a new generation of Chinese and European talent overturning the old order?