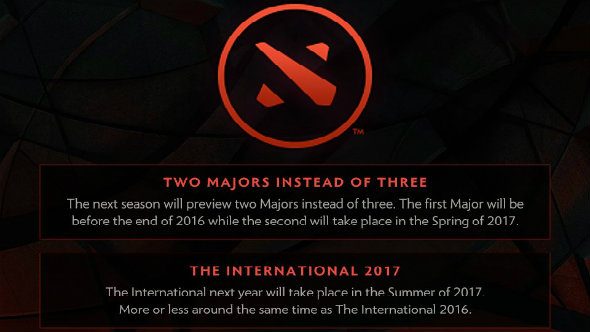 Valve are dropping one of their Dota 2 Majors from the schedule for next year, running with just two and the International, leaving space for some of the smaller tournaments and allowing players and fans time to recharge.

Thinking of getting into the game? Here are the best Dota 2 heroes to start with.

Following the disaster that was this year’s Shanghai Major, many are speculating that it’s the Chinese tournament that will be dropped, but we’ll let you know as soon as Valve confirm their plans.

In other Dota tournament news, the brackets have been revealed for the upcoming International. Details can be found below:

First to play will be the Wildcards, the teams that came third in their respective qualifiers. The top two from here will make their way to the Groups and the bottom two will be eliminated. All games are best out of three.

Execration (SEA), Escape Gaming (Europe), EHOME (China) and compLexity (Americas) will be battling it out. You can see more info on the tournamentsite, but Escape Gaming will be taking on compLexity, while Execration battle EHOME.

The broadcast begins at 9 AM PDT on August 2, 2016. Games down the schedule begin as live games are completed.

Group A is made up of: OG, Alliance, Wings, Natus Vincere, Evil Geniuses, LGD Gaming, TnC Pro and Wildcard Team #2.

The broadcast begins at 9 AM PDT on August 3-5, 2016. Games down the schedule begin as the live games get completed.

See who’s playing who on what day by clicking through on the official site.