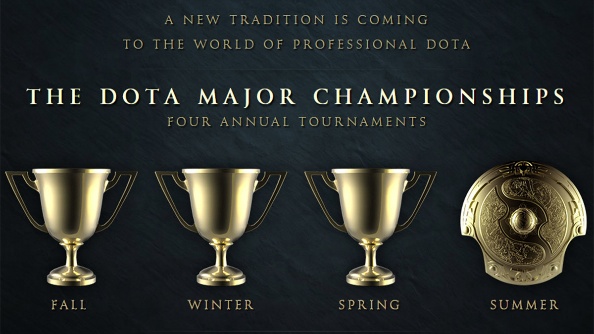 Dota 2 is getting some Major Championships, and they start this autumn. The first event will be taking place this November in Europe, and will be the first of four annual tournaments, which will conclude with 2016’s The International.

To get involved, you need to go through the Open Qualifiers, which can be entered by any team, and take place October 6-9th. Two teams from each region will make it to the Regional Qualifiers, which will be held October 10-13th. The victors will then be invited to take part in the Major.

Other teams may be directly invited to take part in the Major, and invitations to those teams will be announced on October 5th.

To be considered for an invitation to either the Regional Qualifiers or the Major, you’ll need to register at the Dota Major Championships website. If you’re hoping for a direct invitation, make sure your roster isn’t altered after September 5th; if it is, you’ll need to compete in the Open Qualifiers for your place.

The event will welcome spectators, and Valve will release details on tickets “soon”.