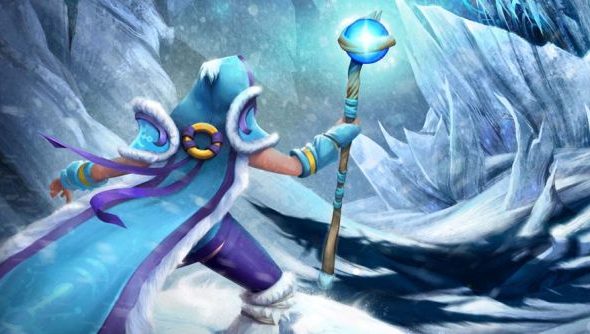 Dota 2 is on the precipice of a new content update, with the return of the New Bloom festival, and it’s Year Beast. But immediately, there’s some noticeable differences between this year’s, and last year’s event. First – it will introduce a new original hero to the game: Winter Wyvern. She’s a huge frosty dragon who’s got a thing for books. Also in the update is a new model enhancing arcana, this time being granted to Crystal Maiden in the form of a frostbitten cloak.

Valve have began the long tease with a light-hearted comic, and a New Bloom trailer.

First, lets digest the trailer. Last year’s New Bloom saw groups of five players take on the Year Beast – a creature of might and ferocity. Those who could deal the most damage to it, while also surviving its ever increasing power, were rewarded with a special courier.

The trailer already deviates from the past, in that the focus appears to be taming the Year Beast in order to overcome a different challenge. Exactly what is yet unknown, but I’ve got a feeling we’ll know in the coming days as more daily snippets are spilled.

Features we can confirm are notable indeed. A new hero, Winter Wyvern, is finally making her way over to Dota 2. She was one of the heroes created post Dota 2, but has remained bound to the original mod, until now. She’ll be played in the support role, with the ability to fly over terrain, shielding allies in ice and forcing enemies to attack their own teammates. Her temperament appears to be far from what any “traditional dragon” might exhibit e.g. she favours books over gold and trinkets.

Arcanas are Valves method of giving a hero a near complete visual redux, without straying too far from their original design; they usually affect appearance, ability effects/icons and their voice. According to the comic – the trailer also depicts it for a swift second towards the end – Crystal Maiden is set to receive her own arcana, which was given to her by none other than Winter Wyvern.

Following Valve’s usual schedule, we’ll find out more info about the incoming update each evening, up until its inevitable release.