With the first of Dota 2’s quarterly big tournaments looming, Valve and Icefrog have finally issued the long-awaited patch 6.85. Normally the first patch after The International each year contains massive changes to the structure of the game, but due to the timing of Frankfurt and the lengthy development process for this patch, 6.85 is a bit more focused on number tweaking than big additions. It’s still packed with significant changes, however.

There’s significant nerfs to various problem heroes, especially the mine-laying, nuisance-causing Techies who has been almost completely redesigned to remove his one-shot factor. Mines will no longer stack in the same place, do significantly less damage and don’t trigger when killed. They’re even rewarding gold now, making placing them poorly an active detriment to you and your team. Other heroes hit with the ol’ nerf bat include Storm Spirit,Lina and Leshrac, all of whom were acquiring a reputation as pub-stompers – heroes that were particularly difficult for unorganised teams to deal with.

Meanwhile much of the rest of the cast received minor buffs. This has been the way of balance patches in the game for a while now. Big changes may be made to the fabric of the game and nerfs will be applied where needed, but generally everything outside the top five or so heroes will have their power level pushed up. Dota has a habit of doing this in interesting ways rather than just tweaking numbers too. For example, this time around Phantom Assassin’s ability to throw a dagger at an enemy, which previously only benefited from the chance to crit afforded by her other abilities, now applies any of her item’s on-hit effects too. The ultimate-improving Aghanim’s Scepter item is also a common way for a hero to receive a ‘non-linear’ buff through a new, wacky interaction. Undying and Batrider both received that sort of change in 6.85. 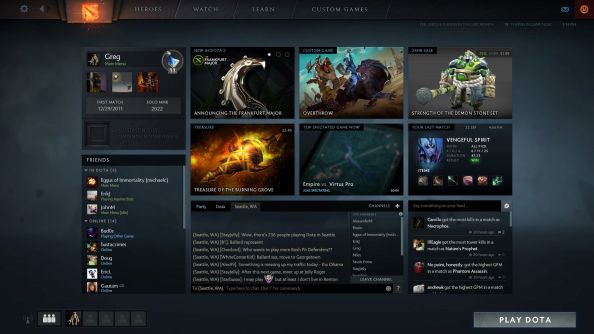 There’s also been changes to the Reborn client’s main menu, pictured above. There were a few complaints about the amount of useless information on the old version, and a lot of that has been removed or downsized in favour of the chat panels. There’s also now a localised chat pane for your city, meaning I’ve discovered there are in fact a load of Dota players in Glasgow. Who knew? Are you one of them? Let’s never play together.

There should be a more significant patch hitting some time after Frankfurt. Speculation has it that then we’ll enter a regular cycle where patches will come out fairly quickly after the majors, then iterated on until thenext major. Then the loop begins again. The TI patch will likely still be considered a reset point for the year, with the biggest changes happening in it. Let us know below how you’re finding this one so far.