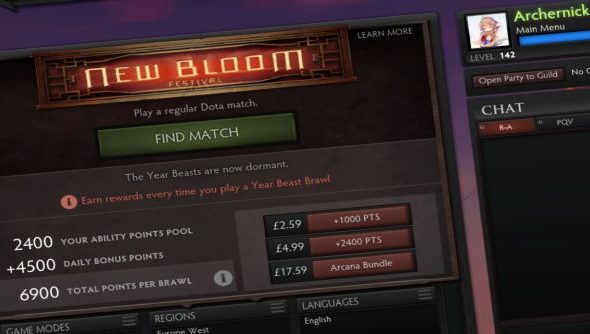 The players of Dota 2 have been enjoying the fruits of the latest content update, with the return of the New Bloom festival. With it, a new game mode has been made available, pitting teams and their tamed Year Beast against each other.

The mode and its rewards have attracted over one million concurrent players in fact.

Unfortunately, the game mode is only made available during limited 10-minute periods at random times throughout the day. The results have caused the Dota 2 network to either put players in lengthy queues, or crash altogether as everyone piles in to play the Year Beast Brawl.

The New Bloom festival is the first major content update of this year, featuring a new hero, arcana and the Year Beast Brawl game mode.

“The Year Beast Brawl is only available to join during 10-minute periods, which will occur randomly a few times each day.” says the New Bloom event page. “A countdown timer will appear an hour before the start of each Brawl, allowing you time to assemble your friends and prepare. Once the Brawl becomes active, all players who choose to join a match during those 10 minutes will enter a Brawl. Rankings are not affected by Year Beast Brawls.”

The event at first proved to be popular: Dota 2 for the first time breeched one million concurrent players.

But as it turns out, it was almosttoopopular

Naturally, players wanting to compete in the new game mode flocked to the game when the first brawl was announced, leading to the number of concurrent players skyrocketing. For a lot of players, the side effects of this sudden surge of players meant frequent disconnections, as the servers struggled to cope with the overwhelming stampede of players. Some players were forced into anentirely separate queue, for the game mode queue itself. Queueception.

An achievement nonetheless for Valve and Dota 2, but it looks like the specific timed nature of the Year Beast Brawl event might backed fired slightly.