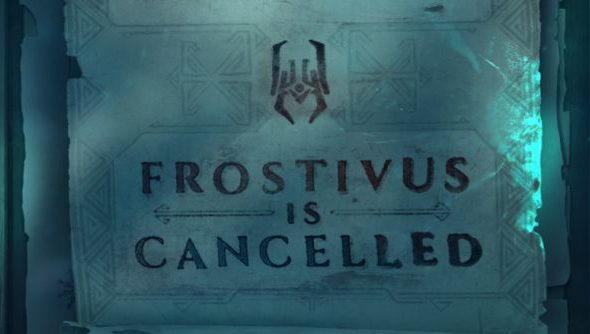 For the third year in a row, Dota 2’s Frostivus festival has been canceled. But unlike the previous two, it won’t be replaced by another e.g. The Greevling, Wraith Night. Valve’s Dota 2 team have made a statement on the matter, and their excuse is rather exciting.

Valve are planning an engine update to Dota 2 in the first half of next year, and committing resources to a winter themed game mode would sap too much manpower from this exciting addition. But rejoice, as Valve have assured that this doesn’t mean we won’t see feature filled patched in the near future.

“We are already hard at work on our next major update,” said Valve. “Although we will continue to avoid building new game modes until the engine improvements come along.”

The concept of Frostivus began back in 2012; Dota 2’s equivalent of Christmas. However, it’s become tradition for the festive cheer to be canceled due to some grinch-like entity, spawning an in-game event for players to enjoy; 2012 introduced The Greeviling, whereas 2013 introduced Wraith Night.

These events take time and effort to produce; already the community lost its much loved annual halloween update, Diretide, to an engine update that the team is working on. “As we mentioned in September, there are a number of features in the works for Dota 2 that we’re really excited to share with you.” explained Valve. “Among them is a major improvement to Dota 2’s engine that we are aiming to release in the first half of next year. One of the main features in this engine improvement will be the ability to rapidly create entirely new game modes. You’ve seen some of this work with the Dota 2 Workshop Tools Alpha that began earlier this year.

“In the past, our Diretide and Frostivus updates contained game modes that were very time consuming to build and maintain, and would need to be rebuilt from the ground up after the release of the engine update.”

Now Valve have come forward to say the same is true for this year’s Frostivus. “With Diretide this year, we decided that it didn’t make sense to build another one of those resource-intensive game modes, for two reasons.” explained Valve. “The first was that the mode would quickly become obsolete when the engine changes arrive, and the second was that building it would have taken resources away from the work that needed to be done to ship the engine change itself.

“Now that Frostivus is on the horizon, we find ourselves facing a similar choice and, after some thought, we believe that once again the right choice is to not develop a Frostivus game mode.”

Whether this engine update is just to help the game accommodate for the onslaught of custom game-modes from the Dota 2 Workshop, or something bigger is unknown. We know that Source 2 is in development; remnants of it can actually be found within Dota 2 today.

Could it be that Dota 2 will be Valve’s first game to debut it?