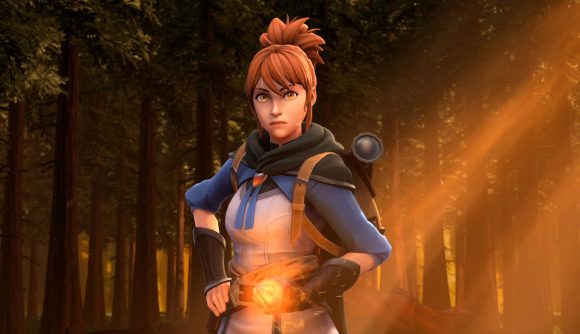 Earlier this month Valve unveiled the next character coming to the Dota 2 heroes roster: Marci, who actually debuted in the MOBA game’s Netflix anime show spinoff, Dota: Dragon’s Blood. Well, today’s the big day for the new hero’s arrival in-game – Marci has come to the live game alongside gameplay update 7.30e, which brings a raft of item and hero balance changes, too.

“Today Marci powers her way from Dota: Dragon’s Blood into the battle of the Ancients as the newest hero to join the fight, proving that undying loyalty yields unrivalled power,” the studio announces in a blog post shared today on the game’s site. “Marci marches into battle ready to raise fists in defence of her companions.”

There’s a new Marci update page giving us a good idea of what the hero brings, in terms of both her backstory and gameplay styles, and Valve’s now shared a full rundown of Marci’s abilities, too. From the sounds of it, Marci will mirror her anime counterpart’s ability to bring down enemies far bigger than herself given her melee-based ability kit – take a look at the full breakdown of her skills below (via Valve).

“Marci grabs an allied or enemy target and throws it effortlessly behind her, damaging and stunning the unit if it’s an enemy. Any enemy units in the landing area will also be damaged and stunned.”

“Vector targeted. Marci bounds to the targeted unit, choosing a direction and distance she will spring away from it. Upon reaching the unit, Marci lunges to her final destination, damaging and slowing enemies in the area.

“Marci taps a hidden power, gaining Fury charges that allow her to deliver a rapid sequence of strikes. The last strike in every Fury combo creates a damaging pulse around the target that slows movement and attack speed for 2.0s. In between Fury combos, Marci is unable to attack for 1.5s.

If you’re keen for the full info on Marci’s backstory and skills, head to the Dota 2 site at the links in the intro above. You can also check out the full list of gameplay tweaks that have arrived with update 7.30e at that link if you’re keen to see what’s changed.