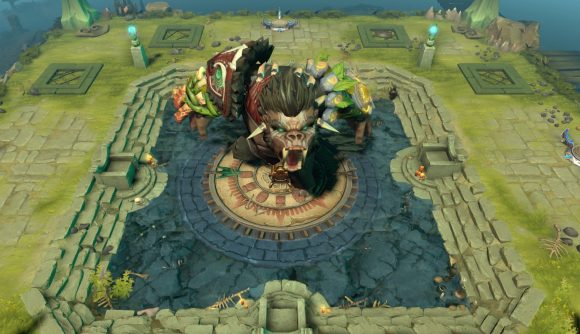 Now that Teamfight Tactics has muscled its way to the top of the autobattler games pile, it’s sometimes easy to forget that the genre began not all that long ago with a Dota 2 arcade mode. There’s a new arcade mode out now called Lostland Commander that’s making waves, and it borrows ideas from deckbuilders, Auto Chess, and others for a whole new game.

Some of the basics of Lostland Commander will be familiar if you’ve played Auto Chess or any of its variants. You’ll recruit heroes to your bench and play them on a field, upgrading these characters by drawing duplicates from the random selection available to you each round. Instead of fighting head-to-head against other players, however, you’ll be taking on increasingly powerful waves of monsters and bosses.

Monsters that escape from the field during a round power up the boss, and so you’ll need to upgrade your heroes with gear and capitalise on synergies to make sure you’ve got as much power as possible on the field at any given time. This time out, though, you’ve also got a powerful captain at the head of the team, but you’ll need to keep them protected because you’ll lose the game if they burn through all three of their lives.

Every so often, you’ll have to fight a boss – and that’s where things get interesting, since all four players’ teams will join together to take down the gigantic beast (currently called ‘Godzilla’). Synergies will activate across teams, and this gives you a lot of incentive to keep your fellow players alive.

Like a lot of transformative Dota 2 mods, Lostland Commander is complicated, and the interface is a bit confusing. We still haven’t had a chance to completely come to grips with all the mechanics, which include a ‘gacha’ system (similar to what you’ll find in Genshin Impact) for hero recruitment. Then again, Dota 2 itself is pretty complicated – which may be due to the fact that it’s based on a Warcraft III mod itself.

Created by an outfit called EoM Games, you can find Lostland Commander on the Steam Workshop if you’d like to subscribe and check it out. With more than 150,000 subscribers since it launched in December, Lostland Commander is already fairly popular – we reckon it’ll be one to keep your eye on.

For more, check out our guide to the best free games on Steam – there’s plenty of exploring to do without spending a cent.