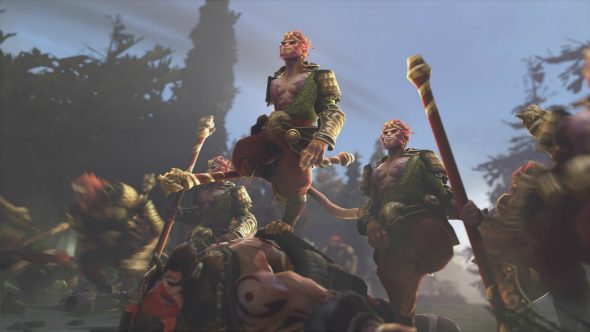 After the excitement of Underlord arriving yesterday to finally complete the original Dota line-up, Valve have quickly moved onto the next phase of Dota 2’s life announcing a brand new hero, the Monkey King.

Will old Sun Wukong make it into our favourite Dota 2 heroes for beginners?

Based on the legend of Sun Wukong, and the classic Chinese tale Journey To The West, the new hero will be a Bo-staff-wielding Monkey regent with some tricksy abilities.

Though only a cinematic has been revealed so far, the moves he showed off against creeps and poor oblivious Beastmaster seem to suggest he has one leap-and-smash-in-a-line nuke, an ability to blend into surroundings and create an army of illusions of himself.

Given the Monkey King has had an item named for himself throughout Dota’s life, it’s possible he may also have a passive ability that grants true strike. My personal theory is that his stealth based ability is similar to Templar Assassin’s Meld, in that he can turn invisible on the spot and his next attack is granted true strike against enemies with evasion.

We’ll find out remarkably soon how wrong I am as the Journey update will be arriving in Dota 2 this fall, probably bringing a whole host of new items and balance changes once The International 2016 concludes this evening.