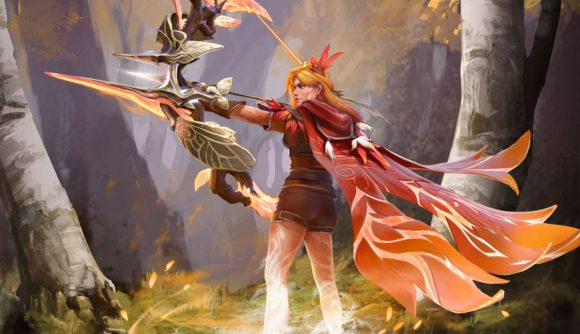 Runes are a familiar – and very handy – feature of Dota 2, popping up on the MOBA game’s map to offer temporary buffs and effects, or even to drop some extra gold into your hero’s pocket. They’ve also got some appealing designs, signalling what each is used for – and now, one fan’s taken this a whole leap further by recreating the runes as gorgeous animated art.

Dota 2 fan SurWesley has been busy recreating a bunch of the multiplayer game’s runes using the open-source 3D graphics software Blender and sharing them on Reddit lately, with several already completed – and they’re really lovely things to look at. One that’s particularly caught my eye is their animated recreation of Dota’s regeneration rune.

Its wedge-like chunk of translucent and vivid green glassy material looks just how you’d imagine it from the in-game model, and we can see its branches and leaves crunch as they wrap around it. It even incorporates that distinctive sound effect Dota fans will know well, so we’re in no doubt what it is – you can take a look below for yourself.

Others include animated recreations of Dota 2’s invisibility, illusion, and haste runes which equally capture the essence of the real deals really wonderfully, though on a whole new level. We’ve included these for you to check out below. There’s also a bounty rune to get a look at but it doesn’t look like there’s an animated version on Reddit. Here’s the regeneration rune:

Regeneration Rune 4 of 7 from DotA2

Invisibility Rune 5 of 7 from DotA2

And here’s the illusion rune:

Illusion Rune 3 of 7 from DotA2

With five down and two to go, it looks like we could be seeing similar recreations of arcane and double damage runes hit Reddit at some point. And I know you might be thinking there should be eight in total – including the recent patch 7.29’s addition of the brand-new water rune – but Sur_Wesley jokes in the replies to their latest creation that “the water rune is fake, they don’t exist. Shhhhh”, so it looks like it’ll just be the original seven in total.

While you wait, be sure to check out our guides to the best Dota 2 heroes for beginners and how to play Dota 2 guides at those links for some handy tips if you’re new and looking to get into the game.