While the main event of the Dota 2 International doesn’t start until August 2nd, it’s preceded by the group stage to determine team placements. Sixteen teams will battle it out over the next four days, and over 112 individual games will be played.

Valve are offering a plethora of ways to tune into the games this year, including their own platform that pulls in various stats directly from the game in real time.

If you want to watch, the first thing you’ll want to do is visit the official Dota 2 International portal.

Due to the sheer amount of games, there’s up to three streams going on at any one time, each showing games between two different teams. On this website, you can chose how you want to watch any one stream by selecting the platform in the bottom left hand corner. 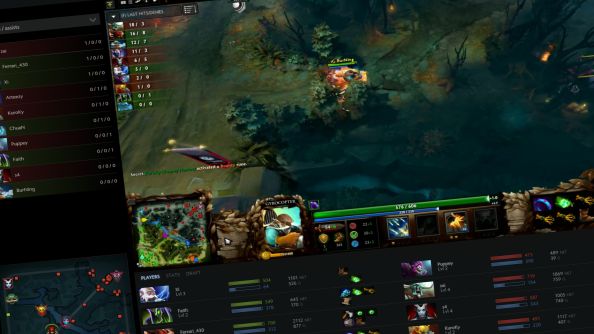 The first and default option is through Steam’s own streaming service. You’ll actually want to click on the “watch now” button located below the stream feed to really take advantage on what Valve is offering. You can also just click here.

This is the Dota 2 Livestreaming Beta – it exploits Valve’s direct connection to the game service itself to pull all sorts of cool statistics, which all updates in real time. You can see the map of the game in the bottom left, a slew of player statistics in the middle, and finally a Steam chat box on the right to talk with fellow viewers. It’s a really cool way to watch the Dota 2 International, allowing you to pick and choose what information is relevant to you.

As standard, there’s also Twitch and YouTube streams of all of the games on their respective platforms.

If you want the most direct and crisp experience however, you’re going to want to watch the Dota 2 International from within the client itself. Simply boot up the game, head on over to the “watch” tab, and then select the Dota 2 International 2015. Here you can watch any of the three concurrent games, and select your casters upon loading in. The advantage here is being able to control the camera yourself, allowing you to finetune the experience.

Tell us – which way are you going to be watching the Dota 2 International this year? Are you going to wait until the main event for the newcomer stream?