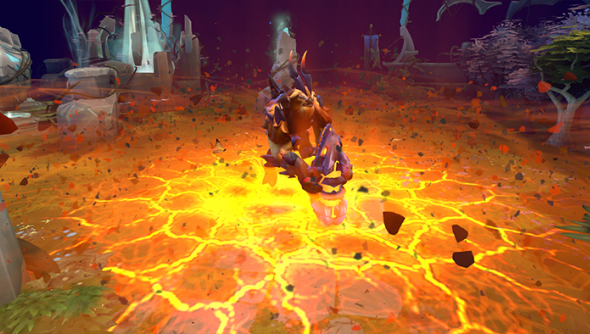 Good evening, PCGN. It’s late and I am tired and they’ve left me with the keys to the CMS. I wish to leave you with a final post for the evening, but it’s something personal, something special, something hundreds of thousands of you have probably already watched, but let’s not dwell on that. Via PC Gamer writer Chris Thursten on twitter, the deciding play from the final game of this year’s Dota 2 International, when Evil Geniuses’ Universe blink-echo-slammed into the full CDEC Gaming team and blew them the hell up.

It’s difficult to know where to start exactly, but I think my favourite moment is one of two. It isn’t Earthshaker’s initial devastating impact, nor the bodies quickly turning to ice around him. It’s either:

Lina having the fast reactions – the whole video didn’t take more than about 10 seconds in real-time – to attempt to run away. She’s doomed, of course, but to even have the wherewithall to click away is more than I could ever manage. It’s a perfect visual aid to the message flashing through CDEC.gardner’s mind – “oh no.”

Then there’s the turn-around fissure that actually kills her, along with two other members of CDEC. It’s such a classy manoeuvre at this speed, but also an impressive display of skill. Going in semi-blind, with microseconds to react, Universe hits the perfect skillshot to immediately drop three members of the opposing team and effectively end the game.

But there is so much to love. When the Ice Blast initially expands to only a small-size, CDEC’s first warning sign that the enemy is closer than they think. The nanosecond timing of the slam into blast that ensures only one member of CDEC even has the time to react effectively. The sprinkling gold from the corpses, the slow motion level-ups, Gyro’s eons-late Calldown. The music, of course. And the memory of popping off in a dark room in London, surrounded by sleepy but now satisified fans at the UK’s largest pubstomp event.

E-sports. They’re pretty great. Here it is in real time, if you happened to miss it, and the full game if you want it: