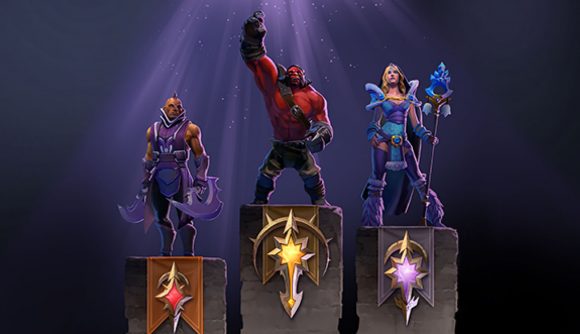 In a glimpse of what’s sure to come, Valve has launched a battle pass for Dota Underlords. Being that the game and the pass are still in beta, this one is called the Proto Pass, and it’s free to everyone who participates in the Underlords beta.

The Underlords Proto Pass includes daily and weekly challenges to complete for experience points that you’ll use to rank up your pass, earning a variety of cosmetic flair along the way. There’s decent variety of this, and it ranges from new game boards to things other than “Yo” to say to your opponents.

Each Underlords match you play in multiplayer, and every hardcore bot match, will also earn points toward your battle pass level.

Valve explained a few of the rewards in a blog post about the proto pass. At level five, players earn a new game board called the Path to Sunbreeze, which is an airy outdoor arena very different from the default alleyway we’ve been playing on since launch. Valve says you’ll also get new ‘Yos,’ which include ‘Ow!,’ a chili pepper emoji, and ‘Oi.’ No word yet on whether we’ll be able to progress beyond two-letter exclamations in the future, however.

But there’s plenty more to earn. You’ll be able to upgrade your banner and battle standard (sort of the way you can in Diablo III), add special portrait frames, set off fireworks effects for victories, and set special respawn and win streak effects.

Claim the crown: Our guide to the best Dota Underlords builds

The first set of challenges I found when I launched Underlords today were healing my units for a total of 50,000 life and picking four Global items following neutral creep rounds, both of which are worth 250 XP. So far I haven’t been able to find the weekly challenges.

Valve says it’s using this free version of the battle pass to collect player feedback to inform how later, presumably paid, versions will work. While this first iteration is fairly straightforward, there’s a reward at every tier, and at the low price of completely free it seems like a pretty good deal for now.