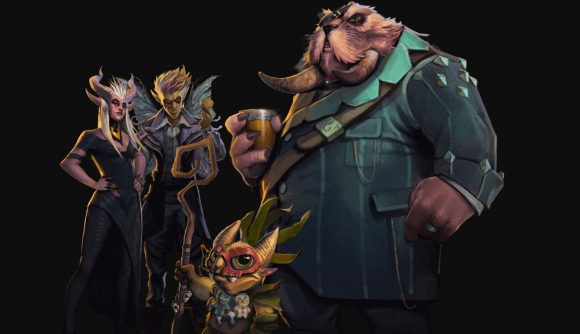 Valve’s own auto-battler, Dota Underlords, will leave early access and officially launch February 25, which will also mark the beginning of the first official battle pass. Valve announced the date with the latest patch this week, which introduces a new underlord named Enno.

The latest Dota Underlords patch, which Valve released Thursday, is the last content update before the game’s proper launch later in the month. Enno, the fourth underlord, is a small, furry, gremlin-like fellow with a bone mask and aspirations to greatness. He has a strong ‘King of the Street Urchins’ vibe, and his abilities let him dart around the board, either healing allies or poisoning enemies, all whilst pickpocketing items from the opposing team.

Enno will follow one of two builds, which is randomly selected each game. The ‘Healin’ n’ Stealin'” build uses the skill Dr. Enno’s Soothing Balm, jumping into the air and firing poison darts at 2-5 enemies, which simultaneously heals adjacent friendly units. With this build, Enno also gets the Yoink! skill, allowing him to steal the lowest-tier item from the enemy crew at the beginning of a combat. He also loots items from enemies that die inside his attack range. All items return to their original owners once combat is resolved.

The other possible Enno build is called Rabid Fuball. In this setup, Enno gets Death Spin, which again uses poison darts. Enno hits 2-5 enemies again, applying poison stacks and dealing 20-66 physical damage per stack. He also gets All Out Attack!, which lassos the opposing crew, deals 50-225 physical damage, adds five poison stacks, and scatters each enemy affected onto a random square on the board.

Poison, by the way, is another new addition to Underlords. Poisoned units will take 15 points of physical damage per second, and the poison reduces healing by 10% for five seconds. The status effect can be stacked up to five times, Valve says.

That poison effect has been worked into the rest of the game, with Venomancer’s Venomous Gale ability and the Orb of Venom item now applying the poison status effect.

As mentioned, this is the final ‘big’ update for Dota Underlords before the official launch February 25. The official release will see more major changes to the game, including the new Battlepass, City Crawl Mode, hero and item rotation, and a UI rework.