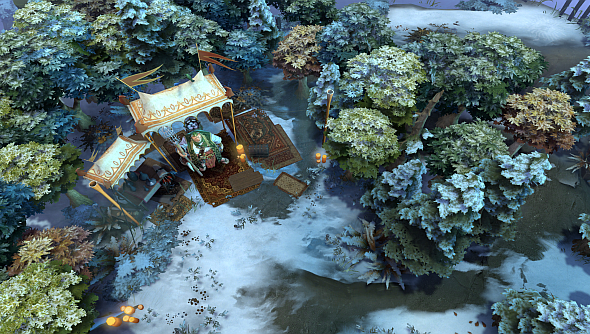 It’s starting to feel more like Christmas every day. It could be the snow falling outside my lovely warm house, but I think it’s also the plethora of new clues that a winter themed map and game mode, alongside a customisable HUD are coming in the latest Dota 2 patch. Included: a Greevil’s whistle and… PRESENTS.

We have known for a while that a winter map and even a new mode will be coming this Christmas. Now we can take a sneak peak at the map via an image of the mini-map sourced from the talented, good looking, and surprisingly manly CyborgMatt. Also spotted are specific references to “A Greevil Whistle” and “Presents.”
Dota 2 was previously transformed for Halloween, when a new gamemode debuted in which players fought over candy on a revamped map called Diretide. The team with the most candy won before teaming up with the enemy to battle a very hungry Roshan. Teams with the fastest times were rewarded shiny new Golden Roshan couriers, but the methods by which players won their Golden Roshan proved controversial.
Alongside the Christmas mini-map are the first references to customisable HUD skins: presumably allowing Dota 2 players to theme their game as they see fit. If HUD themes come close to anywhere near the level of professionalism of the Polycount entries then it’s time to get very, very excited.
Elsewhere, three heroes have been given a make-over: Silencer, Wisp and Death Prophet all have chosen different colours to wear onto the battlefield.
The feedback from the community to the new hero skins has been mixed. Some have called Silencers new affection to purple an “abomination”. However I think he was always too similar to Dragon Knight. Death Prophet has a new red look, which gives her skin a better sense of contrast than before. Wisp has had the most minor facelift, opting for a lighter shade of blue in that, ball of light thing that it has going on.
Excited for the Christmas patch? Want a new hero already? Let us know below.