Rejoice, Dota 2 fans, beloved Halloween event Diretide is back for the first time since 2013. The spooky game mode itself has changed substantially, so even if you do remember how to play Diretide from back in the day, you’ll find quite a different challenge awaiting you – although it still involves Roshan gobbling up all the candy he can get his big ol’ claws on.

There aren’t any Greevil Eggs to obtain this time around, and you won’t be facing off against Roshan at the end, but many of the mechanics still remain – including taffy reducing your maximum health for every piece you hold; hoarders beware. There’s plenty of loot to be had; earning Diretide Points nets you one of 75 spooky rewards, and Hallowed Chests of the Diretide will drop as a reward for playing. Just like in 2013, you’ll need to purchase keys to open these chests, but there’s a ‘Trade Up’ system in place so you can turn ten items of the same tier into a random item of a higher tier.

So whether you’re a first-time Diretider, or a candy-hoarding veteran – if you’ve come a-knocking in search of a Dota 2 Diretide guide, you’re in the right place. Here’s everything you need to know about how to play Diretide, and how to get all the goodies from the seasonal event – which will last until December 22.

How to play Dota 2 Diretide

Here comes big ol’ Roshan; he’s sick of Cheese and is looking for dessert. Just like regular Dota, you queue in teams of five, pick from the best Dota 2 heroes, and face off against a rival team for control of the map and its objectives. The map isn’t what you’re used to, though – there’s a top and bottom lane that join together in a kind of circle, with a pit in the middle where Roshan sits.

Greevil Taffy is dropped by creeps and Scarecrow Stashes – if you get the last hit on a creep, their taffy is automatically launched in your direction. You can also steal your enemies’ taffy by killing them. Each team has a Home Bucket next to their base, which stores their taffy – you’ll need to run back to cash your candy in, or you can pass your stash to a teammate who can ferry it back for you – remember, each stack of taffy you hold reduces your maximum health by 6%, so you’re a much tastier target with full pockets.

There are Taffy Wells near your base in each lane; both Taffy Wells and Home Buckets are protected by Taffy Guardians, but these can be defeated – take down the enemies’ Taffy Well and you’ll steal ten of their stashed taffies, and expose their Home Bucket to attacks. If you get aggressive enough to reach the enemy Home Bucket, you can keep punching it until it drops all the enemy’s taffy. 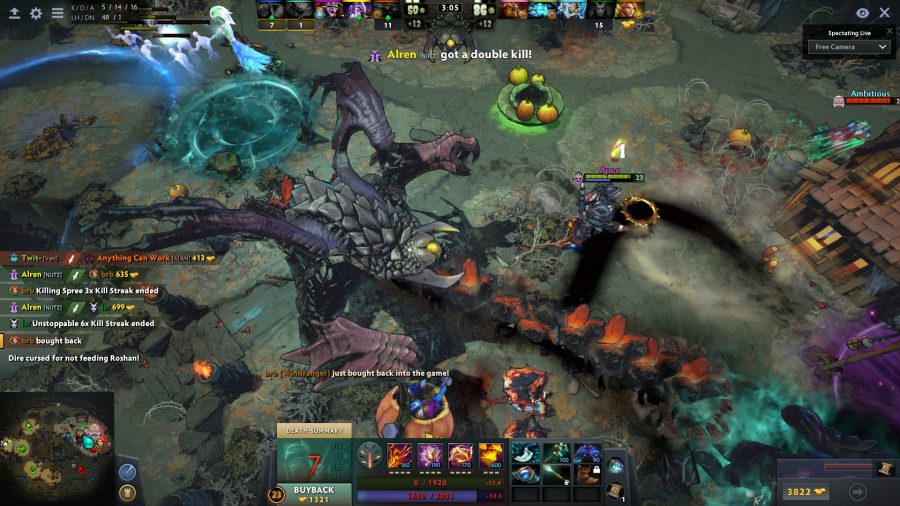 Scarecrow Stashes spawn at one, three, and five minutes, at the top and bottom of the map. They drop a whole bunch of taffy when destroyed, so make sure to contest these – they also drop Dota 2 neutral items, corresponding to the current round number. It’s a best-of-three format, so there are five possible rounds in each Diretide match – each round lasts five minutes each, and features different unique lane creeps.

Roshan himself isn’t content to watch all this excitement unfold around him – he wants some of your taffy for himself. You can’t attack or kill him in this mode, either – you can only sate his hunger or fall victim to his wrath. Every two minutes, he’ll choose someone at random to attack – there will be a number above his head; that’s how many candies he needs to calm down. If you fail to feed him in time – or die to his hangry attacks – your team will receive Roshan’s Curse, which causes non-lethal damage over time. 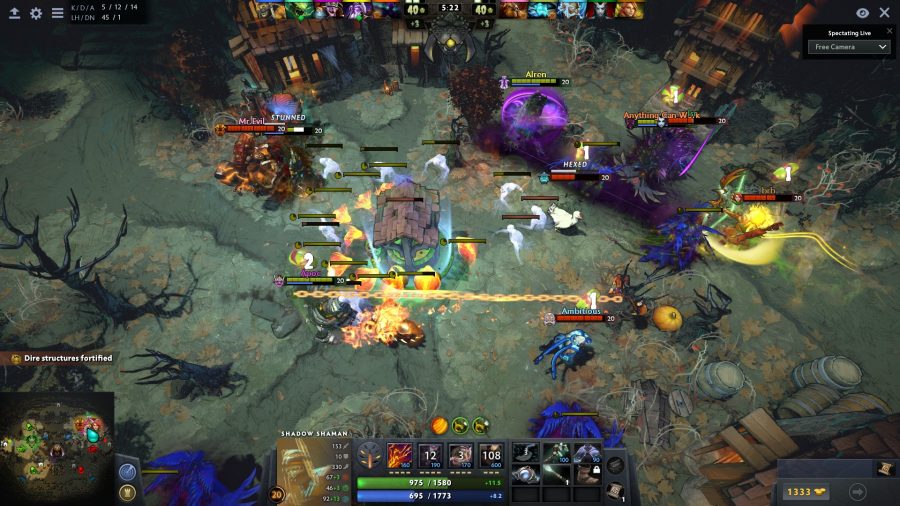 This version of Diretide is brand new, so we’re still working on our strategy – securing control of the Scarecrow Stashes appears to be vital, and we’ve seen a 4/1 lane split in several matches – you definitely need someone in each lane so your foes don’t free-farm, but aggression – particularly at the start of each round – is vital, since a kill gives you a huge farming advantage.

In terms of heroes, Shadow Shaman seems an excellent choice because he can put the enemies out of commission with his hex and shackles, and surround the enemy buckets and wells with wards to damage them and drain them of candy.

How to get Diretide Points

You get Diretide Points automatically from each match, regardless of whether you win or lose – you’ll gain between 9 and 13 points depending on the day. You can earn additional points per match by getting First Blood, securing the first Scarecrow Stash, destroying the first Candy Well; etc. You also get Diretide Points from regular Dota games, too.

You get a reward for every 100 Diretide Points you earn, which could be an equipment set, spray, emoticon, treasure, cosmetic item, chat wheel sounds, or MMR double down token – there’s a full list of rewards on the wiki.

That’s everything we’ve got on Diretide for now – we’ll let you know if we learn of any winning strategies. For more spooky festivities, check out the best ghost games, best horror games, and best zombie games on PC