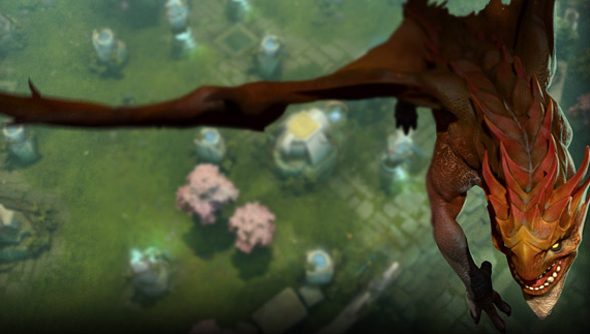 Gabe’s talked a lot about bottlenecks recently – mostly in a negative sense, in relation to Valve’s curative role at the head of Steam. But an artificial bottleneck is exactly what the studio’s eased Dota 2 out of in recent months – gradually expanding their queue system that gated entry into the MOBA’s community.

The steady flow ensured a stable game for existing beta players, but made it somewhat difficult to track Dota’s rising popularity. Today, though, the gates are fully open, and we finally have a figure – 6.5 million active users per month.

The number places Dota far ahead of its closest competitors on Steam – currently stablemates Team Fortress 2 and Counter-Strike: Global Offensive, according to Steam’s daily stats. But it’s unsurprisingly still a seemingly insurmountable distance behind chief genre rival League of Legends – LoL was enjoying 32m monthly players over a year ago, and has only grown since in cultural and commercial stature since.

The news about Dota was buried not-very-deeply in a post nominally about the end of the Age of Sign-Ups.

“We’ve used a queue system to gradually increase the size of our playerbase, as we ramped up our infrastructure and improved the experience for new players,” they wrote. “As we have recently completed a set of server management upgrades as well as released a huge number of enhancements to the new user experience, we’re going to remove all restrictions to playing Dota 2.”

That means signups are no longer required, and Valve are encouraging friend recommendation via a recruitment feature that confers bonuses on both parties – so expect that number to increase rapidly in the coming weeks.

When did you start playing Dota? Or, what’s keeping you?