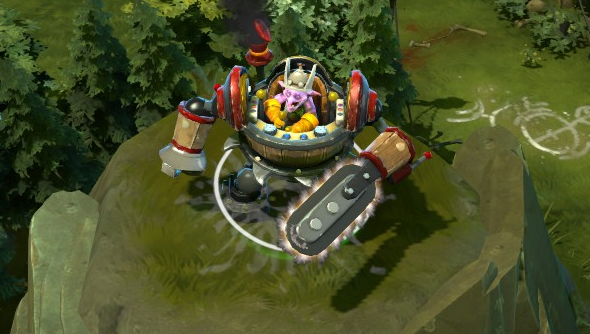 It’s patch day in Dota 2 land: for the first time in a few weeks, Valve have treated us to a new hero.

Meet Timbersaw. He is a tree-shredding machine of death. A complete anti-environmentalist. Many of his abilities revolve around cutting down the foliage. He is not fond of chlorophyll.

Meanwhile, there are signs that the Bastion Announcer Pack is nearing: but we knew that was coming six months ago.

Timbersaw’s backstory makes little sense. He’s a Goblin who suffered a traumatic experience: walking trees slaughtered his entire town. He vowed to tear apart every tree he came across, and built a walking mech suit to do it.
All of his abilities can cut trees down in a flash. He also features a passive which boosts his armour and health regeneration every time he takes damage. I’ve had the pleasure of playing some games with him – I’ll have more impressions later today. Or tonight.
Our friendly Cyborgmatt is currently MIA today, but I’ll add his blog post to this when he returns. He did however have a quick peek inside the patch last night to tease us all. Most notably is the discovery of the “Bastion Announcer Pack”, which should be hitting the main client in either this weeks or next weeks update.
The narrator from Bastion was a real treat to listen to. Now you and I can pay a paltry sum of money and listen to his slick tones while I’m pwning in pubs. I can’t wait to hear what they have come up with.
Check out the patch notes below: