After six long weeks, Valve have answered the Dota 2 community’s prayers by releasing a new hero, Bristleback.. Rigwarl the Bristleback is cockney man-pig-hedgehog. A durable initiator, Bristleback can slow his enemies down with his Viscous Nasal Goo (snot), while shooting quills from his back to anyone that stupid enough to pick a fight.

Also in are some new UI updates, renamed heroes, remodeled heroes and another upcoming courier you’re not going to want to miss.

Valves latest hero iteration, Rigwarl the Bristleback is a dirty pig. That’s not just because of his infinite runny nose. What makes Bristleback unique is his fearsome backside, which has the potential to ruin any carries day if they’re not careful. Lets take a quick look at his abilities:

Viscous Nasal Goo: Covers your unlucky target in snot, which reduces their armour and movement speed, increasing in potency with multiple stacks. It’s cheap mana cost and low cooldown means you can spam this all day long. Yuck.

Quill Spray: Those quills on his back are deadly spikes, which ignore damage block abilities/items such as Kraken Shell and Vanguard. At first they don’t do a tremendous amount of damage (20/40/60/80), but if you cast Quill Spray on the same target within ten seconds, they take an extra 30 damage, up to a maximum of 400. Again with a low cooldown and mana cost, spam away.

Bristleback: This is where the magic happens. Bristleback takes less damage from attacks/spells from his side (8%/12%/16%/20%) and rear (16%/24%/32%/40%). Every 250 damage Bristleback takes from his robust rear, he releases a Quill Spray at the current level. If you try to engage this spiky problem without a thought in your positioning, prepare to quite literally, kill yourself.

Warpath: Bristleback’s ultimate is a passive which buffs his movement speed and damage with each spell he casts, stacking in intensity. At five stacks, he moves 10%/17%/25% faster and hits for 100/125/150 more attack damage.

If you want to see Bristleback’s abilities in action DotaCinema have a handy preview here:

Coming down from the magical high of a new hero, Valve have also added some other important stuff you should probably know about. Now if you hold your Alt key over various abilities, it will show further information such as magic immunity interaction.

Also in is a new pause mechanic, which renders the team that pauses unable to move their camera, check heroes inventories or check the shop. This should stop any accusations of “tactical pauses” in the big pro games. 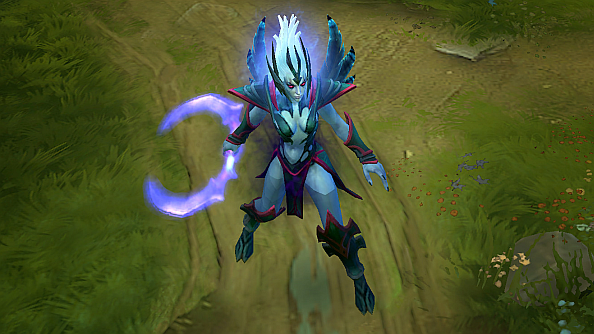 Vengeful Spirit has had a makeover, with Wisp has been renamed to “Io” and is now back to his old blue colour. Beastmaster has also had his voice work revised.

Oh, here is that snail I mentioned:

JUST LOOK AT IT, but also look at the patch notes:

– Phantom Lancer: Fixed being able to have 1 juxtapose illusion too many

– Slark: Fixed Pounce not initiating an attack order on the leashed target.

– Visage: Fixed Familiars not getting affected by Chronosphere.

– Weaver: Fixed being The Swarm units being unable to Latch onto sleeping units.

– Weaver: Fixed The Swarm getting permanently dispelled if the enemy is invulnerable .

– Weaver: Fixed the Swarm units not doing their initial attack immediately upon latching.

– Fixed heroes flickering on the minimap when walking by Sentry Wards while under Smoke of Deceit.

– Pausing in a practice or tournament game now prevents the team that paused from querying units, moving the camera or accessing the shop.

– Added ability and item notes, detailed tooltips that will display only if ALT is pressed.

– Arcane Boots now has ‘mana’ as a shop alias.

– Steam friends can be added, removed, and friendship requests confirmed/ignored from within Dota 2.

– Added in-game models for when the following items are dropped from inventory into the world: Gem of True Sight, Observer Wards, and Sentry Wards.

– Several old keys have returned to the store along with a very low drop rate for some older community chests.