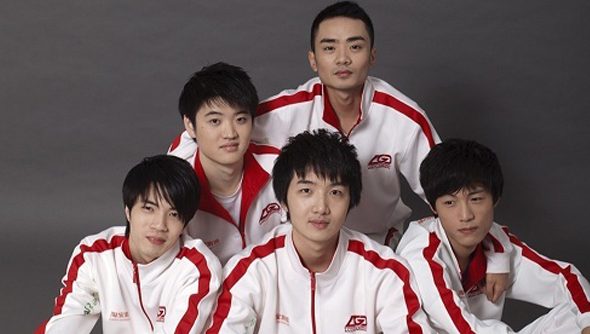 We’ve been through the preliminaries, coming out of the other end bleary eyed, tired, shivering just a little bit and wondering what it all means, whether warding really is all that important and if anything can stop China from becoming the most powerful Dota force known to man. After a two day break, the International is back, and it’s kicked off in just about the biggest way possible, with LGD, the unbeaten champions of Group A, going up against Orange, one of Group B’s stronger teams.
If you’d rather not find out who won, don’t click on that big shiny link underneath these words. Because I’m going to tell you. Don’t do it, man.

The first match saw a pretty hefty lineup on LGD’s side, grabbing Rubick, Invoker, Anti-Mage, Tidehunter and Shadow Shaman, giving them a whole grab-bag of stuns and disables, while nabbing one of the hardest carries in the game in Anti-Mage. Natrually that was Sylar’s, with Yao on Invoker, and that pretty much set the tone for the game.
Orange, on the other hand, had Nature’s Prophet, Leshrac, Nightstalker, Shadow Demon and Kunkka, meaning you had the Ship’s Captain going up against the Sea Monster, only they were unfortunately laned well away from each other, on opposite sides of the map.
Kunkka was a smart pick on Orange’s side, though, as he completely nullified Anit-Mage for a good portion of the early game with Tidebringer, a splash attack that makes grabbing any creep kills on the lane a nightmare. Seeming as Sylar had been so incredibly important to LGD’s game in all 14 of their Preliminaries, it made a certan tactical sense to try and neutralise him early.
The only problem is that, even with all that push in Nature’s Prophet and Leshrac, their aggression was consistently denied, giving LGD kills instead of netting Orange towers, and the instant the laning phase drifted away Sylar’s AM just got freefarm, roaming the map and grabbing himself gold by the handfuls, all while his team kept Orange at bay both by laying a defensive screen around him, and occupying them in teamfights. Teamfights Orange needed to win, but consistently came away from bloodied and on the backfoot.
By the time the late game rolled around, Orange were outkilled, outlevelled and outfarmed, and Sylar and Yao just mopped up, grabbing the barracks, wiping Orange’s team in a fight, and netting themselves the first win of the Tournament.
Which meant that Orange needed to win the next game to stand in with a chance of continuing onto the Winner’s Bracket semi-finals, and put an incredible amount of pressure on them to break LGD’s winning streak.
So they opened strong, grabbing the Rubick and Invoker that had done so much damage to them in the first game, along with Queen of Pain for Mushi, Windrunner and Enchantress. LGD replied with Beastmaster, Morphling on Sylar, Chaos Knight, Leshrac and finally a Disruptor to enable their teamfight.
The idea, then, was to interfere with LGD’s support structure that made Sylar’s carry so strong, and, amazingly, for a good portion of the game, it seemed to work, with Mushi’s Queen of Pain racking up huge kills, grabbing triples and multis all over the place. She was consistently ahead of Morphiling’s net worth, in the thousands of gold, which means that she was a threat right up until the late game.
The late game which, unfortunately for Orange, started to tip back in LGD’s favour. Instead of falling apart under pressure, once they were finally put on the backfoot, for the first time in the entire competition, they hunkered down, went on the defensive and then pushed forward, armed with Black King Bar’s that meant they were all but impervious to the worst of Orange’s teamfight.
With the worst of their bite sanded away, Orange buckled, leaving LGD with the win, and leaving them facing elimination if they can’t win a single match in the Loser’s Bracket. One loss and they’ll be out of the tournament. It’s a safety net, but it’s a precarious one.
LGD, however, continue their unbeaten streak and head into the Semi-Finals, where they’ll face the victor of Complexity vs Zenith.