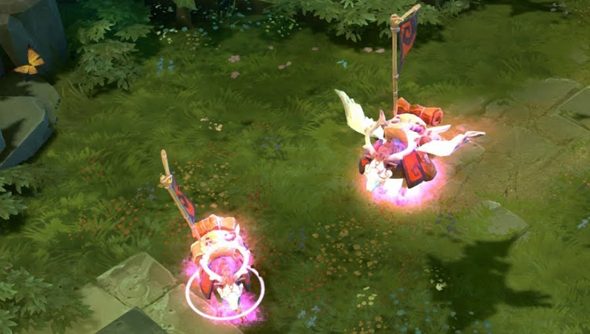 Ugh. Remember that Dota 2 fan who bought a hyper-rare courier for $38,000? And today’s update, which rendered colour a trait detachable from couriers via gems? Well – it turns out those two bits of information connect up in such a way as to inspire groans of sympathy.

You might recall that the war dog courier in question was afforded its (still very subjective) worth by its ethereal flame particle effect, and especially its pink pigment – a colour of incredibly scarcity since Valve patched out randomly generated shades just weeks after unusual couriers were implemented.

Among two new heroes, a coaching system and the belated reintroduction of Diretide, today’s mammoth Dota 2 updatealso rendered colours as gems – which can now be swapped between couriers or sold individually on the market.

The owner of the $38,000 pink war dog will have this morning discovered that it’s now simply a war dog with a pink gem attached. The peculiar neon shade of the gem will likely render it a collector’s item in itself – but it doesn’t take a mathematician to work out that its relative rarity isn’t a patch on the hot-pink, ethereal-flame, war-dog triple jackpot it previously formed a part of.

What’s more, players who’d previously landed rare colours on not-so-hot courier types are now free to flood the marketplace with their own gems. Some of them will probably be neon pink.

In summary: ugh. The poor soul who decided to buy a courier rather than a deposit on a new house just over a week ago is probably regretting that decision today.