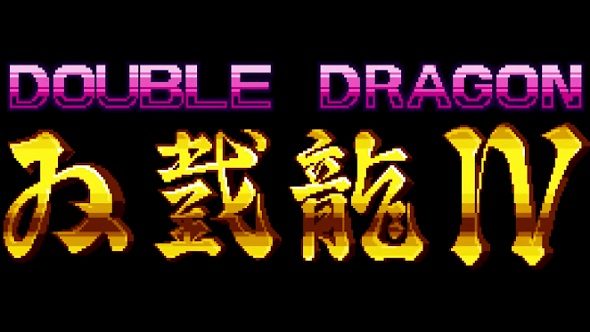 Coming out of nowhere like a flying kick to the mouth, Arc System Works have announced a new installment in the retro beat ‘em up series, Double Dragon. Acting as a direct sequel to Double Dragon III: The Sacred Stones, Double Dragon IV goes back to the series’ 8-bit roots, eschewing the newer art style of Double Dragon Neon for the old school pixel art of the original NES games.

If you’re a fan of old school couch co-op, check out these other PC co-op games.

To signal the game’s imminent launch, Arc System Works have released a suitably campy trailer, complete with dramatic voice acting and a short recap of the Double Dragon story. After being attacked in the desert by a biker gang known as the Renegades, brothers Billy and Jimmy travel to Japan in order to save Billy’s girlfriend from the shadowy Okada clan. The story is as nonsensical as it gets, but it’s any excuse to travel across the world, punching, throwing and kicking sumo wrestlers, bikers and ninjas in various locales.

Besides your traditional beat ‘em up campaign which can be played in local co-op, Double Dragon IV hosts a separate two player battle mode, where players can fight it out to prove who is the best Lee brother. There is also a new Challenge Tower, where brawlers battle through wave after wave of enemies in their quest to the top. As you pass certain floors and defeat special sub-bosses, players can unlock bosses from the story mode as playable characters. Yes, you can finally live out that childhood dream of playing RightArm from Double Dragon II by playing through the Challenge Tower. There is even a secret boss if you reach the top, so get fighting if you want to unlock them.

You won’t have to wait long for this new installment of the Double Dragon series, as it is out on Steam on January 30. No news on pricing as of yet but keep an eye on the Steam page for more information.