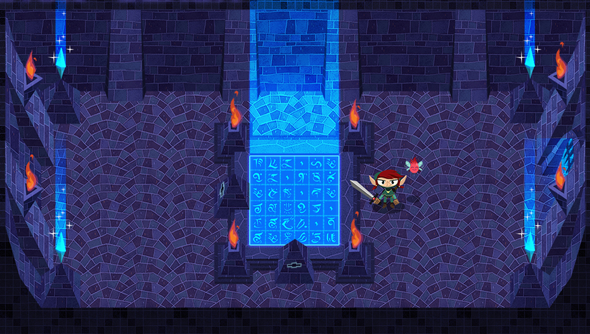 Oh, this is terribly exciting. Spacebase DF-9 will be good in the not-too-distant future, I’m sure, but it was never the most alluring prototype to emerge from last November’s Amnesia Fortnight. No: that was Hack ‘n’ Slash – a Zelda-style top-down adventure in which you’re more likely to modify a guard’s stats to read ‘HP=0’ than stick him with a pointy stick.

The aim of the original prototype, built by a fraction of Double Fine’s team in two weeks, wasn’t just to simulate hacking – but to allow players access to the actual stuff of the game: its code. Bits of basic programming conducted via the game’s UI became tools for environmental manipulation. Reduce a guard’s vision to nothing and you can sneak past him unhindered. Enlarge a fireball-breathing mob by six times, and her next, overlarge glob of flame will envelop all of her fellows.

“I’ve always loved games with lots of secrets in them,” said project lead Brandon Dillon yesterday. “And when I first discovered a hex editor in an emulator, it dawned on me that I could be a kind of digital treasure hunter – no game could keep even its deepest secrets from me if I adventured long enough in its code and memory.”

I must confess, I’d worried Hack ‘n’ Slash was too radical a proposition to ever make it to market. Given that the game allowed players to manipulate and amplify its systems to the point of absurdity, the occasional crash was inevitable – a supported feature. How do you customer support that?

Yet here we are. Double Fine say that the “mystery and discovery” of the game’s hacking mechanics will be approachable to non-programmers – but expect that the most dedicated of code-monkeys will uncover reams of secrets beneath the game’s malleable surface.

Hack ‘n’ Slash will be out sometime in the first half of next year on Windows, Mac and Linux. Did I mention that the prototype had no checkpoints, but instead an emulator-style save state function? This is going to be brilliant.