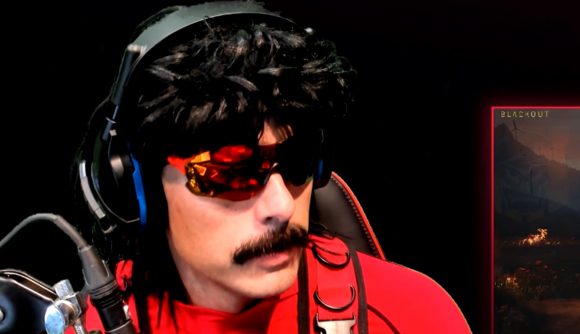 Dr Disrespect has his Twitch account back after getting banned for streaming from an E3 bathroom, but the streamer hasn’t had much to say about the incident since it happened (aside from the usual jokes about firing his director). But today, Guy Beahm – the real person behind the Dr Disrespect persona – has issued a statement and an apology.

“Real life personas are so difficult to pull off, especially in today’s society,” Beahm writes (via Kotaku). “Doc is edgy, highly opinionated, cocky, etc. and that certainly adds to the difficulty in staying authentic without offending anyone on a deeper, personal level. When we were walking around filming at E3, we clearly weren’t thinking about the laws/repercussions of filming in the bathroom because honestly, it wasn’t in our mind frame at the time.”

Beahm adds that “we were so into the E3 IRL journey that we became a little blind in what’s ok and what’s not ok. We had no ill intentions and I feel that was pretty obvious if you watched the entire thing.”

He adds that he and his team were trying to “capture an adventure” at E3, but “unfortunately we took that adventure into the wrongs areas unaware of the legalities surrounding it. On behalf of the Dr Disrespect brand, I apologize for this.”

Beahm’s reference to “the Dr Disrespect brand” makes him sound pretty distance from the character he’s publicly portrayed for so many years, which is tough to swallow after he’s been been so inseparable from the Doc throughout that time.

“I think those that have followed me for years outside of the character,” Beahm says, “even before Twitch, know what kind of person I am.”

Beahm concludes “This incident was a step back, but like anything, we learn, become stronger, and move forward. If you follow the brand or myself, I hope you continue to stay with me on this vision.”