Of all the coming holidays, Dragon Age Day on December 4 might be the one series fans are looking forward to the most. Since players founded the event in 2018, the annual celebration of BioWare’s fantasy RPG series has continued to grow. Last year, the studio even contributed to the festivities by releasing new short stories and previously unseen artwork – fresh crumbs of information for fans to devour in anticipation of Dragon Age 4 news.

“The fact that our unofficial day is now marked and celebrated by BioWare itself is probably the best compliment we could ask for,” Dragon Age Day founder Teresa M says.

But the event isn’t just a community celebration; it’s an opportunity for fans to support inclusive causes they believe in. For the past four years, the founders and their fast-growing team of volunteers have run a tight ship, steering their passion for Dragon Age and its capacity to bring people together towards raising funds for charity. Co-founder Angela Mitchell says “We’re proud to have involved dozens of Dragon Age celebrities, artists, devs, and writers, as well as expanding our message internationally, but we’re proudest of the way our event gives back, raising over $30,000 USD for charity so far while boosting the call for greater accessibility and diversity in gaming.”

This year, AbleGamers – an organisation dedicated to ensuring disability inclusion in gaming – is the fundraiser’s featured non-profit for the second year since 2019. Other non-profits with similar missions, such as I Need Diverse Games, are also receiving a boost during the event and on social media. 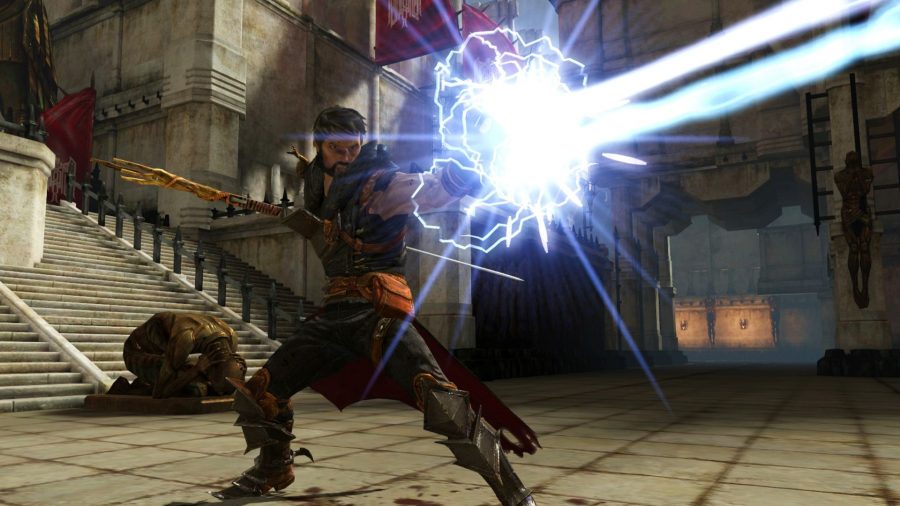 Considering the spotlight that’s being shone on non-profits like these, Dragon Age II turning ten years old earlier this year, and the fact that it’s Dragon Age Day, now is the perfect time to discuss why the maligned second entry is so special to accessibility advocates.

Upon its release in March 2011, Dragon Age II faced a storm of controversy. Critics and fans alike criticised it for recycling assets and environments from Origins, the structure of its narrative, and the decision to make the protagonist a human character with an established personality and voice. This was a step away from Dragon Age: Origins’ much-loved web of prologue stories and unvoiced protagonist, which let players more freely conceptualise the histories and dispositions of their Wardens.

However, Dragon Age II did receive plenty of praise for BioWare’s captivating writing and its streamlined combat, and stands as testimony to the miracles game developers can produce under creative limitations and the stress of crunch culture (which is, nonetheless, always to be regretted). It defined Dragon Age as we now know it: with a voiced protagonist, a unique blend of action and strategic gameplay, and a focus on emotive storytelling. And ten years later, it is, surprisingly, still the most accessible triple-A RPG game I’ve played as someone with mobility disabilities. 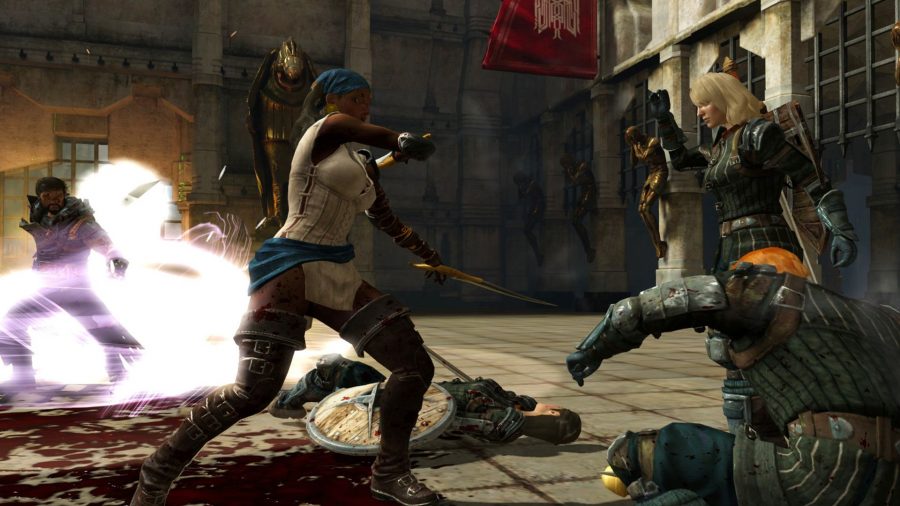 In most third- and first-person RPGs, camera movement is bound to cursor movement without any option to remap it. This presents challenges for players who lack the strength and dexterity to handle a mouse and the WASD keys simultaneously. Workarounds like the on-screen keyboard (OSK) often can’t be read. While we’ve seen recent triple-A games like Ubisoft’s Far Cry 6 attempt to solve this issue, using the OSK to handle movement and combat just isn’t there yet.

But BioWare’s Dragon Age series stands out as an exception and offers us an example of how we can integrate the OSK seamlessly, and combine it with other accessibility features to give gamers with physical disabilities the immersive experience we deserve.

For the first two Dragon Age entries, it’s possible to play without any keyboard at all once you’ve named your character. The camera follows your character whenever you hit right-click to move, engage an enemy, or collect loot. The UI lets you click on every ability and menu screen you need. And Dragon Age II distinguishes itself with powerful AoE abilities, companions that aren’t paperweights, and frequent auto-saves. 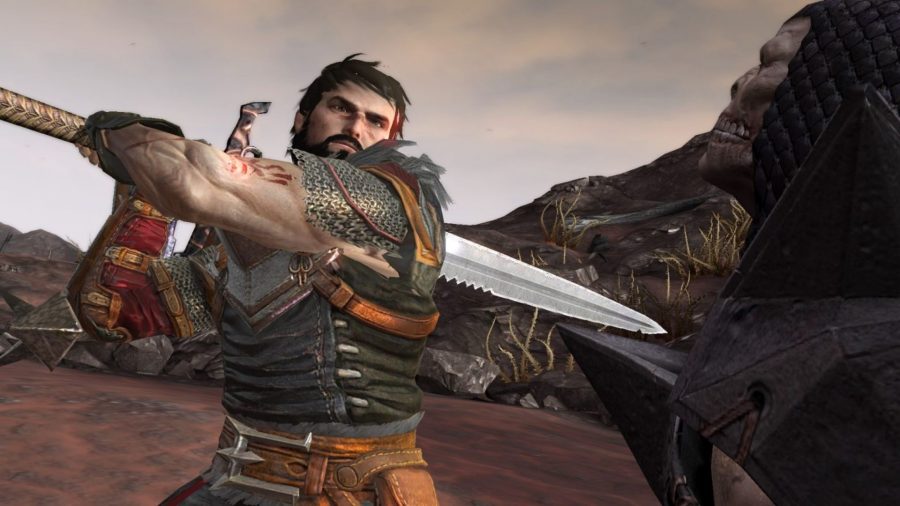 Its sequel, Dragon Age: Inquisition, takes a step back in this regard despite having more accessibility options than its predecessors. You can technically use the mouse-only approach by unpausing Inquisition’s Tactical Mode feature – which lets players arrange their party like pieces in a board game – but camera movement is clunkier, companions tend to get in your way, and you still need to hit the spacebar on your keyboard to jump over obstacles and ledges.

This isn’t to say Dragon Age II is a perfect example of accessible game design, even in regard to mobility accessibility. Its wave-based combat prevents players from correctly assessing whether they can handle a fight before entering it. The boss battle with the Arishok at the end of act two is hell, even on the casual difficulty setting. The UI’s menu buttons are barely a pixel larger than a cursor, presenting a barrier to visually impaired players which is exacerbated by the dim, low-contrast design of the menus and environments. Other design choices, such as giving NPCs speech bubbles for their ambient dialogue and adding clear outlines to the compass, are more accessible compared to what you’ll find in Inquisition, but there’s no escaping the fact that much of what makes Dragon Age II so accessible comes down to the year it was released in. 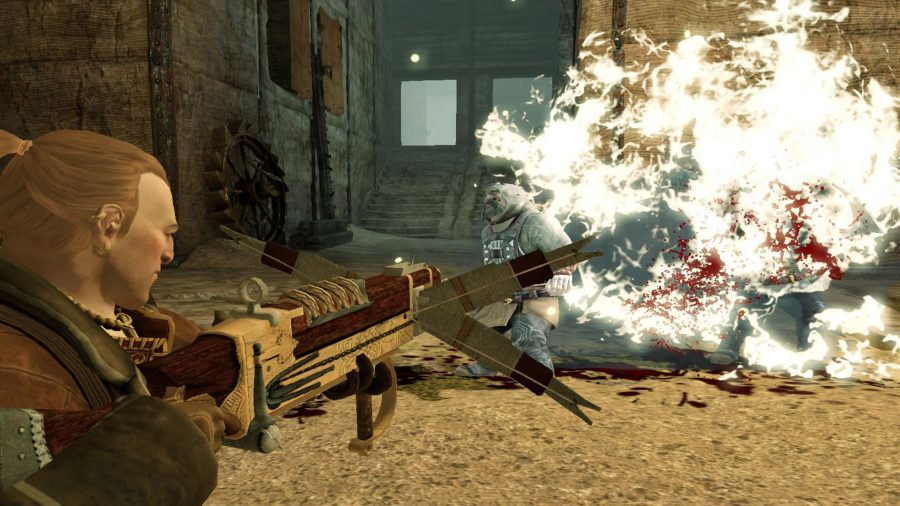 Still, what BioWare managed to pull off with mobility accessibility is impressive. The studio demonstrated, though likely unknowingly, that accessibility is about presenting choices to players, and properly integrating those choices into core functions. One still wonders what more BioWare could’ve achieved if given more time, not only in respect to accessibility but the entire game. Could the studio have pushed boundaries further, if it hadn’t been forced to publish what was essentially a first draft in a severely limited development cycle?

Some incredible design choices emerged from BioWare’s rush to meet EA’s 16-month development timeline. I could endlessly praise the genius of using a companion like Varric Tethras as both an unreliable narrator and a narrative failsafe, should a soft retcon of the story be desired down the line. But as we celebrate Dragon Age, accessibility, disability non-profits, the series’ fans, and the people behind this beloved series on December 4, let’s call the industry’s crunch culture what it is: an accessibility issue in and of itself, that prevents developers from doing their best work for fans and often bars disabled gamers and developers from a seat at the discussion table in the first place.

“Dragon Age Day is truly a labour of love for all involved,” Teresa tells me. That’s what I see when I look back at Dragon Age II – a labour of love and a unique piece of videogame history, from which developers and publishers can still learn today.

Sherry “Elisa” Toh is a hopeless romantic in all things. It’s probably why she keeps replaying the Dragon Age games. Find her talking about accessibility in gaming on Twitter or over at SMA News Today.