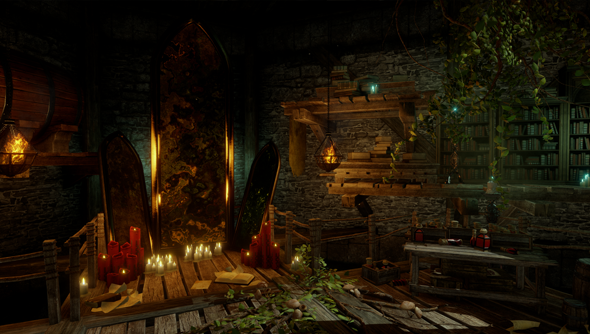 Bioware are building a beta test program for Dragon Age Inquisition which will let a group of PC players play upcoming updates ahead of general release.

Bioware admit that their patches are being slowed down “due to the nature of the certification process” on consoles. “It can often still take weeks after developing a fix to release it on different platform”. PCs don’t have that problem so they’re looking to “foster better communication between our players and developers.”

Bioware’s closed beta program will give players access to Dragon Age Inquision patch 5, the largest update to the RPG since release. The studio hopes it will give “our developers a great, new way to work directly with our players” and allow them “to more quickly identify and respond to future issues.”

Patch 5 will introduce a new area, the Black Emporium, “a mysterious underground shop run by an immortal proprietor.” The shop sells more than just powerful new gear, the Mirror of Transformation lets you change your character’s voice and facial appearance. You’ll also be able to use crafting materials to change the colour tint of your attire.

The patch also adds more control to the PC version of Inquisition. You’ll be able to change shader quality in the graphics menu and bind an auto-attack key to the mouse.

Bioware say there’s more changes, too, but the they’re keeping them quiet for now.

To take part in the beta program you’ll need to sign up for it via the Keep program. Signups will open in “the near future.”

Hopefully we’ll see this patching program continued within Inquisition and spread out to other EA games. Too often the a game’s patch is held back on PC to release in sync with the consoles when the infrastructure is not the same.