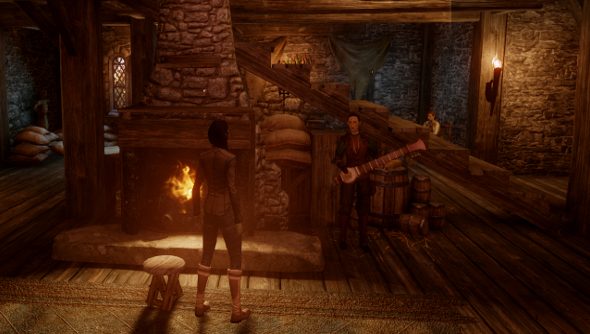 Exploring Dragon Age: Inquisition’s world, Thedas, yields all manner of treasures, from stolen breeches to fancy swords, and every now and then you’ll find a song. That’s not peculiar, since, scattered around the fantasy land are all manner of texts, from political treatise to theological dissertations. But what makes those songs a wee bit more special is that you can listen to them, back in the Skyhold Tavern.

Skyhold’s bard belts out tune after tune, from songs about myths to ditties in honour of the Inquisitor’s band of unlikely allies. And BioWare’s releasing 10 of the tunes for free, for a limited time.

“We’ve received many inquiries from our fans asking where they can get these songs, and we’re thrilled that you’re enjoying them as much as we do,” reads the Dragon Age blog post. “As our way of saying thank you for being the awesome community that you are, we’re excited to announce that for the next two weeks, you can download these songs from a desktop computer free of charge!”

The download also includes the sheet music, so if you’re musically inclined, you can entertain everyone you know with songs about elven thieves and big ol’ dragons until they ask, no, beg you to put a sock in it. Ignore them and just keep playing.

If you reckon your own rendition is a bit spiffy, then you might want to enter the fan contest that BioWare’s putting on. The contest isn’t open just to musical entries, though. If you submit art, music, videos, cosplay, or whatever you want to do to express your wonderful self, then you might be in with a chance of winning.

The grand prize is one of those Xbox One doohickeys, Dragon Age: Inquisition – Inquisitor Edition, a signed copy of the game and a t-shirt. Four runners up will get a signed poster. You can submit your entry to [email protected]