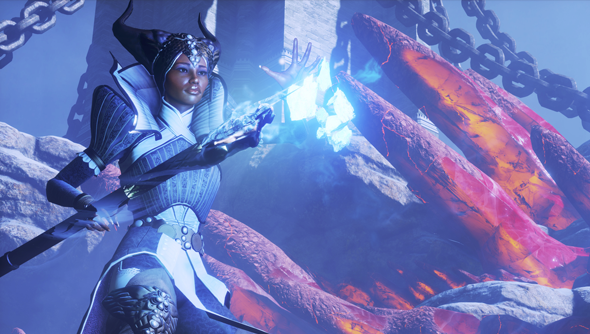 The latest trailer goes introduces one of your possible companions, Vivienne. An Orlesian mage, she’s an adviser to Empress Celene and, no doubt, someone good for a laugh when you need some light entertainment after dinner – rabbit from a hat sort of thing.

We don’t learn a great deal about Vivienne in the trailer, only that she’s disliked within the Orlesian court and that she’s keen to get involved in stopping that great green light shooting down from the sky. But a glance at the Dragon Age wiki tells more. She became the Imperial Court’s enchanter, a role akin to a jester’s, and turned it into an advisory position to the empress. From there she’s solidified her place in court politics by having her opponents excised from the court and preventing herself from becoming caught up in out of state affairs like the Mage-Templar War.

We don’t have long till we can meet Vivienne for ourselves, Dragon Age Inquisition’s release date is November 18.

Still, it does nothing for the loss of parlour tricks.

For everything we know about the launch check our Dragon Age Inquisition guide.