BioWare have confirmed some of the details of their upcoming Trespasser DLC for Dragon Age: Inquisition. It looks like it could be the expansion we’ve been waiting for.

Set two years after the main story’s cliffhanger conclusion, Trespasser will detail the fate of the Inquisition and your party members, as well as seeing the anticipated return of one of your old companions. If you’ve finished the main game, you should check out the trailer below to see who it is.

It looks like Trespasser will have you hopping between locations – maybe even other worlds – with the Eluvian Mirror, and the trailer also seems to hint at the Qunari being the main antagonists of its story. BioWare have confirmed this will be the last bit of DLC for Inquisition, so expect it to answer most of the burning questions that ending raised.

“Trespasser tells an entirely new story, set two years after the main game,” writes Mike Laidlaw on the game’s website. “The story explores what it’s like to be a world-saving organisation when the world no longer needs saving. It’s a chance to meet and talk with old friends, to uncover a new threat, and ultimately decide the fate of the Inquisition you worked so hard to build. It might just contain hints about the future of Thedas, too.” 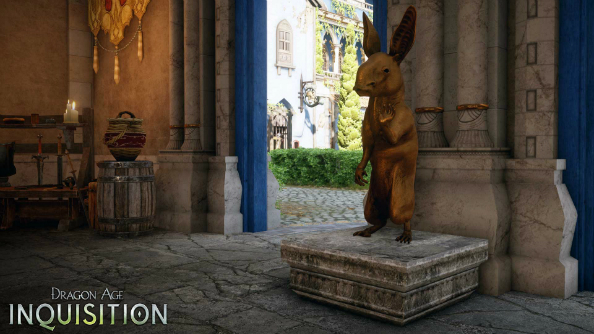 As well as revealing details about the DLC, Laidlaw also laid out some additions heading to the game in an upcoming patch. The first of these is a Golden Nug statue that will be added to Skyhold’s undercroft.

Once you’ve completed the game, you can use the statue to share your collectibles across all of your characters and playthroughs. It’s a bit like New Game +, but will be compatible with playhroughs you may have already started, each contributing towards your collection.

Your bedroom in Skyhold is also getting a wardrobe that comes with around a dozen outfits of varying colours and styles.

Does this sound like the DLC you’ve been waiting for? Let us know what you think in the comments.