I am guiding some sort of weird bison thing out of a canyon. It’s taking an age. I’m bored and frustrated and I already know that there will be no light at the end of this tunnel, just a meager reward and a half-hearted pat on the back. I’m replaying Dragon Age: Inquisition, the result of having no real concept of time and a desire to experience the DLC expansion. I’m not having as much fun as I thought I would.

For the role-players that get it right, check out our list of the best RPGs on PC.

Last year, I put forward that open-world games were becoming too bloated to be fun. The latest Dragon Age was one of my rant’s targets. But there’s another issue, one that extends far beyond Thedas and the open-world setting. RPG side quests are trash.

Don’t trust blanket statements, people. You’re too good for generalisations, and I apologise for farting one out just there. I just wanted to get your attention. If I had the time I’d also do a little dance, show too much flabby skin and maybe set off some fireworks. A lot of them, though, are truly terrible. A massive, stinking compost pile of awfulness lurks inside a lot of games that should be better. 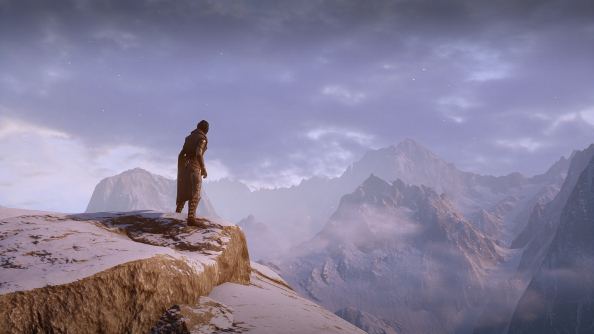 2015 was the year I admitted this to myself. The year of The Witcher 3 and Pillars of Eternity. The year of Fallout 4.

Somewhere during my 90-hour romp through the Northern Realms as just about the sexiest, most curmudgeonly monster hunter I know, I realised something terrible was happening. It was something that I’d been grasping at only months before, as well, when I was sneaking and slicing and chatting my way through Obsidian’s fantasy opus. These quests are too good. My time is not being wasted, it’s being respected. Was this going to ruin other RPGs for me? Or at least more conventional, triple-A fare?

“But ranty man on the internet,” I hear you cry, “The Witcher 3 also contains a quest where you must guide a stupid barnyard animal back to its owner, invalidating everything you’ve ever said!” Damn you, hypothetical reader, you’ve caught me out. Or maybe I picked this specific side quest just so I can compare the two. Ah-ha! 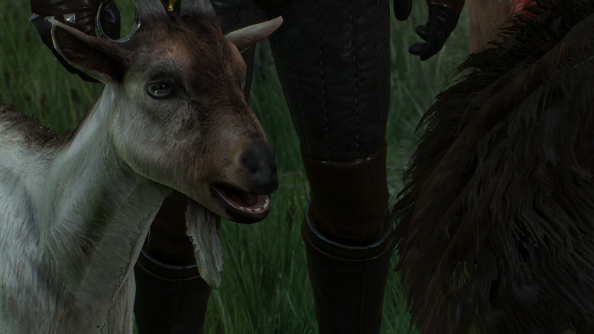 Yes, Geralt has to find a goat and bring it back to an ugly old man. It’s not the game’s greatest moment. It is, however, a whole bunch of things that the quest in Inquisition is not. Brief, for example. Funny, too, as Geralt coaxes a wee creature with a little bell. It bleats merrily, as it follows the grim, angry monster slayer. And the best part: it runs off and smack bang into an angry bear. “Run, you piece of shit,” Geralt growls. The goat bleats indignantly. Geralt draws his sword.

Humour, surprise, a bit of tension and a fight – not bad for a quest to rescue a goat. My reward wasn’t just armour or gold or experience points, it was a moment of levity in a game that frequently made me question my choices and even gave me a lump in my throat a few times. In Dragon Age: Inquisition, sidequests are all about acquisition. New agents. A new sword. More power. They keep the gears turning, but not much else.

Inquisition is far from the only RPG to phone it in when it comes to optional content. There’s almost every single MMORPG ever made, for example, but the most notable recent RPG is undoubtedly Fallout 4. This is really Skyrim’s fault. Bethesda decided that what their huge 100+ hour RPGs really needed was more quests. An infinite number of them, in fact. In Fallout 4, these took the form of missions offered by the four factions you can join. Help this settlement. Find this tech. Go to this dropbox. Murder this guy. Actually, all of them mainly involved killing guys. And gals. And mutants. Lots of killing. In an endless loop. 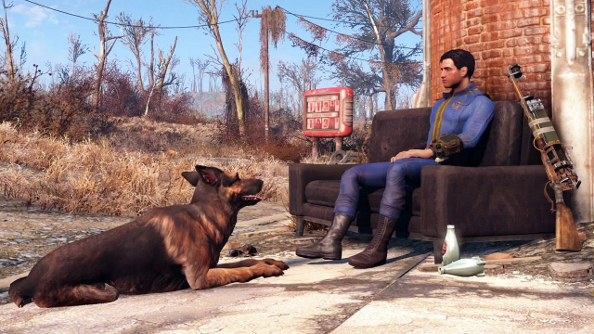 Lamentably, these random, sort of procedural quests were accompanied by a multitude of proper, scripted side quests that were almost as colourless. Basic missions doled out by paper-thin characters with the sole purpose of getting you to progress. Gear. Levels. Cash. For every quest that gets you to do something like dress up like a pulp radio hero, dishing out justice, there are a mountain of them that treat the player like a weapon. Go here. Kill these things. Report back.

One could make weak justifications for this. Allow me to stomp on them.

“These games are so big; there’s no way the designers can make all of them meaningful and fun.” 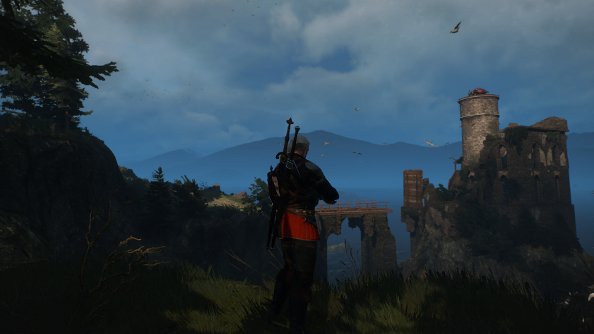 Yes, they can. Particularly in triple-A games with insane budgets and loads of incredibly talented, creative developers. Sure, there are going to be misses. And even The Witcher 3, along with games designed by smaller teams like Pillars of Eternity and Divinity: Original Sin, sometimes just send you to kill stuff, though they usually at least attempted to do a bit of world-building or throw in some interesting context. Ultimately, though, these games prove that RPG side quests can be full of interesting characters, mystery, character development and compelling stories. And they are all gargantuan games.

Let’s pretend we don’t live in a world where this is possible, though. In this utterly fictional parallel universe, there’s still a solution: don’t make so many damn side quests. Seriously. Stop it.

“Getting new gear and experience and lovely money is its own reward.” 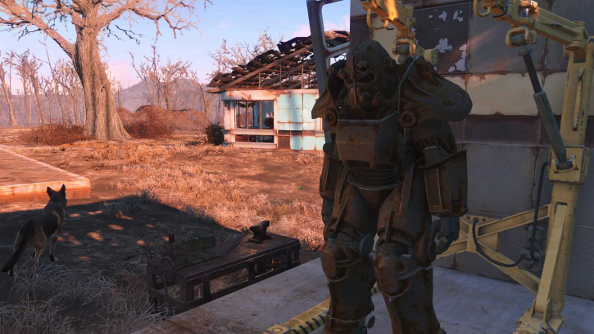 Oh gosh, a new piece of leather armour. How did I live without this before? Ok, I’m being facetious. In fact, I played 100 hours of Fallout 4 – many hours after I got bored – just because I have a fetish for post-apocalyptic fashion. But the moment of elation I get, that lovely warm fuzzy feeling that tickles the part of my brain that makes me so materialistic, it’s so much briefer than all the hours of drudgery that build up to it.

There’s no reason why a smaller number of more meaningful quests can’t offer just as many rewards as all that busywork.

“You don’t have to do every quest.” 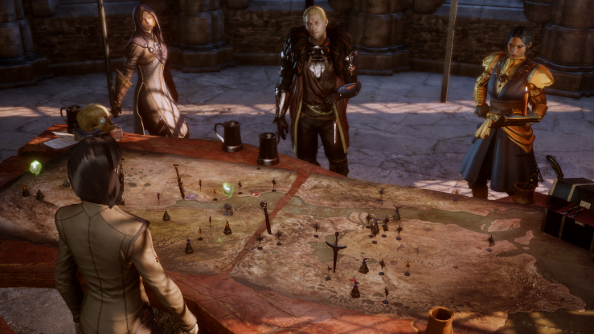 Oh, but I do. Have you met my obsessive brain? But even I didn’t have this relationship destroying sickness, it would maybe be nice to actually want to do every quest because they are good. And let’s not kid ourselves: game designers want us to play the entirety of their game. Of course they do. They’re not mad. Well, some of them are, but this is not an example of their madness.

Modern RPGs are especially designed for the compulsive, obsessive completionist. Their maps are fat with icons, realms bursting with collectibles, quest logs full of reminders that you haven’t quite finished the 80 million tasks still left for you in the bloody Hinterlands. And wouldn’t it just be delightful if we were driven to do these things not because of Pavlovian mind games, but because they were fun and clever and exciting?

Right, I’ve finished responding to the Devil’s Advocate who lives under my bed. Sorry about that.

At their worst, insipid side quests entirely break a game’s ability to immerse us in its world, and in a roleplaying game, this is like taking a big, steaming jobbie on the adventure. Why am I, the Inquisitor and leader of an increasingly powerful and influential army, killing goats for a hunter’s dinner? What on Earth would possess me, the mother of a stolen child, in the middle of my quest to rescue said child, travel in the opposite direction to kill a bunch of random radroaches for a farmer? 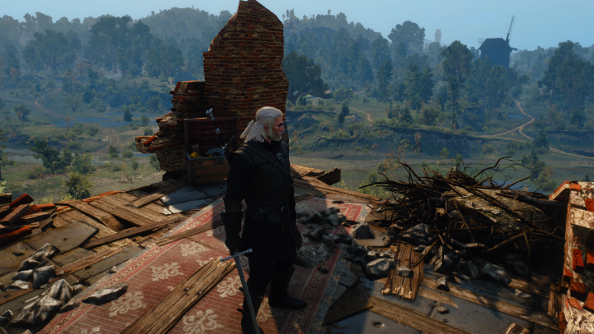 In any RPG, one needs to suspend their disbelief a little bit. Geralt spends a lot of time hunting monsters when he’s meant to be searching for his adopted daughter, for instance. But that’s also his job, his nature and his calling. And at least these are mostly important tasks that only he can deal with. There’s context.

Perhaps, in games like Inquisition and Fallout 4, the developers have been working on these franchises and similar ones for so long that they possess a confidence that allows them to no longer second guess themselves. They need an editor, in that case. Someone who can ask simple questions like, “What does this actually add to the game?” Any quest, side or main, needs to be imbued with some kind of purpose beyond the mechanical. Does it tell a story that’s worth listening to? Does it flesh out a character or the world? Does it have the potential to affect the player? Anything is better than just making them a chore with a reward at the end.

Games that get side quests right have one key ingredient: the designers recognise that a side quest can be just as important as the main quest. In many ways, they are even more important. They allow us to develop our characters in a thousand tiny ways that can impact the direction we choose to go down when we start walking along the main road again. And they can change the world around us. 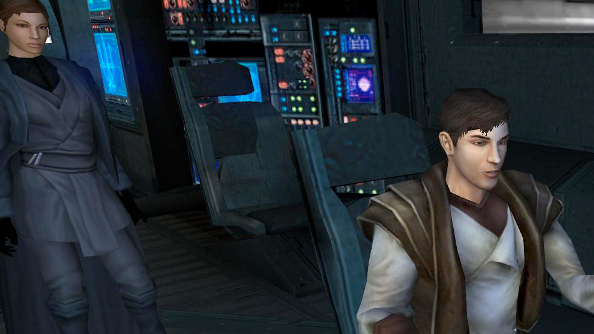 Through side quests and conversations in Knights of the Old Republic II, I made almost all of my companions Sith. I remember watching Atton Rand break down, almost crying, as he confessed his greatest sin to me, and I remember rebuilding him into a heartless killer. I’d never felt so evil in a game before. It disturbed me. It was entirely optional.

In The Witcher 3, I agreed to kill a ghost near a lighthouse. Just a standard bounty. This led to a tavern brawl, dead villagers, Geralt’s imprisonment, a deal with a noble and then a quest in a cave that forced Geralt to face his fears and failings. It was entirely optional.

In Divinity: Original Sin, I helped two cats date each other… It was entirely optional.

Whenever I think about the all time greatest RPG quests and character moments, my head is filled with things that I could have so easily missed. Places you might not have visited. People you perhaps never spoke to. Quests that I will remember for years that were not compulsory. I might remember shouting at my monitor as I attempted to draw a big cow out of a canyon in Dragon Age: Inquisition, too, but not with any fondness.