Slaying dragons, seducing Freddie Prinze Jr. Iron Bull, everything that Sera does – there are a lot of things I love about Dragon Age: Inquisition. At about 100 hours long if you want to properly gorge yourself, and filled with striking, open-world sized areas and countless riveting adventures, it’s hard for any one element to stand out as exceptional when so much competes for attention.

After wandering through desert canyon mazes, savage coasts that pelt me with rain and cities full of masked fops and dandies with hidden blades and poisoned tongues, I realised what I loved most about Dragon Age.

It was coming home, back to the Inquisition, after a hard adventure. It was being reminded that I had an army at my back and the fate of the world on my shoulders in a way that’s never been presented in a BioWare RPG. And it’s encapsulated most by the war council. 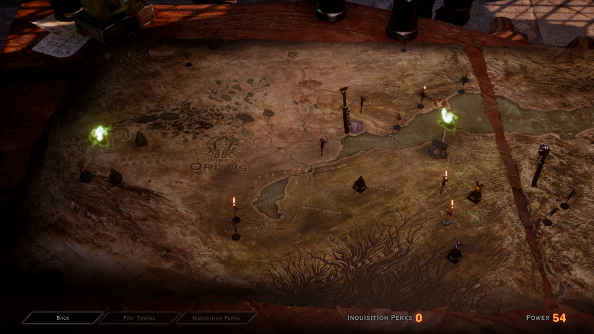 BioWare RPGs have, since the days of Baldur’s Gate, been about support networks. The great quest or massive undertaking is something only the player-character can do, but they can’t do it without making alliances first. It’s just too huge. The Bhaalspawn, Revan, The Grey Warden – they all had to accept help before they could mend or corrupt their respective universes.

Of course, skilled players could probably get through many of the challenges without a party, but these friends, temporary allies and pragmatic rivals don’t merely serve to make it easier to decapitate a dragon or blow up an alien ship. They can be anything from a moral compass to a lover, giving the world or universe a human (Turian, Dwarf, robot) face. They are as much empathy generators as they are sword arms and spell-slingers.

Indeed, more and more we’re seeing the veteran developer putting extra effort into the characters who will never actually follow the itinerant hero on their great journey. Mass Effect gave Shephard a whole bleeding crew to boss around, but it’s in Dragon Age: Inquisition that we see these non-companion characters becoming properly integral. 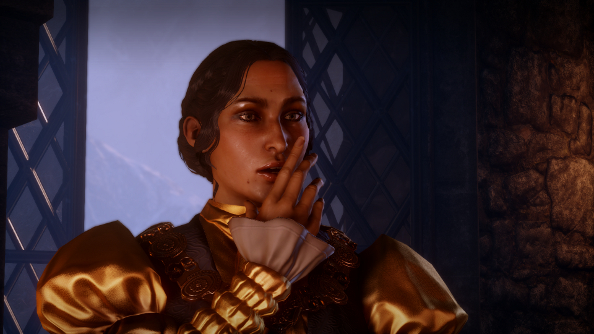 Mechanically, the Inquisitor’s war council is simple, but effective. They represent the three pillars of the Inquisitor’s influence: Cullen represents military might, Josephine handles diplomacy, and Leliana lives in the shadows. When summoned to the map that displays Ferelden and Orlais, they become extensions of the player’s will, able to deal with new crises that erupt out of the cloth by sending their own minions all over the world.

A group of Orlesian nobles are kicking up a fuss! Do you task Leliana to dig up dirt on them and weaken their position? Maybe you want to go down the less subtle path, commanding Cullen to send a group of well-armed soldiers to linger outside their meeting place. Who you choose dictates how long the mission will take, and what the result will be.

It’s all delegation, because the Inquisitor doesn’t have the time to deal with every little problem on the face of the planet, but it’s still interactive; there’s still choices to make and control being exerted. In Dragon Age: Inquisition you aren’t just a hero – you’re the head honcho of a massive, international force of soldiers, politicians, nobles and clergy, and it feels like it. Indeed, it borders on strategy, at least in theme, if not execution. The sorts of decisions the Inquisitor has to make wouldn’t feel out of place in a game like Crusader Kings II. 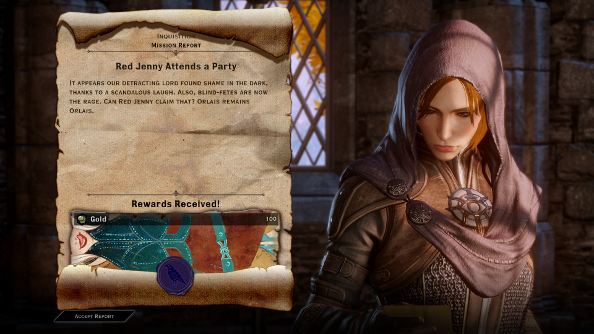 But this trio of advisors is so much more than a bunch of handy mechanics and systems. In the map room they chat and plan as the Inquisitor surveys the realms that are increasingly under his or her control, but it’s when they leave that room that Cullen, Leliana and Josephine bloom, revealing that they are as fleshed out and important to the narrative as any companion is.

Leliana, of course, has been a companion before, though she was a very different person when she helped the Grey Warden end the Blight. And we know Cullen, as well, from his days looking after the Circles of Ferelden, in Origins, and Kirkwall, in Dragon Age II. They’ve changed a great deal since then, becoming harder, sadder – beaten down by misfortune. Josephine balances the tragedies of her peers with her inherent optimism and soft approach, but she has her own problems as well.

It all makes me feel extremely guilty for playing pranks on them all with Sera that one time. 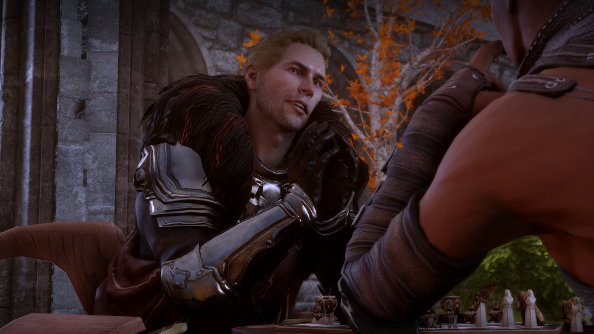 The world of Dragon Age is not a cheery one, cheeky adventures with Sera notwithstanding. It’s one where people live in fear of magic, while mages live in fear of slavery; where monsters pour out of the ground without warning and nations frequently stand on the edge of annihilation. And this darkness has touched every single member of the war council. That’s why they are yours to command: because they still believe that there’s a chance someone can make it better.

So the war council is not simply a sword, a sneaky dagger and some nice words, it’s a reflection of how the world is, and what it could become if someone has the will to repair it. Leliana dreams of a Chantry that helps people, a progressive institution that’s still built on tradition; some would say a juxtaposition. Cullen struggles to reconcile his past as a Templar with the new order, while also wishing he could answer the question of what can be done with all these bloody mages. And Josephine wants to use words and ideals in a world that’s filled with demons, magic and swords, where diplomacy and murder go hand-in-hand.