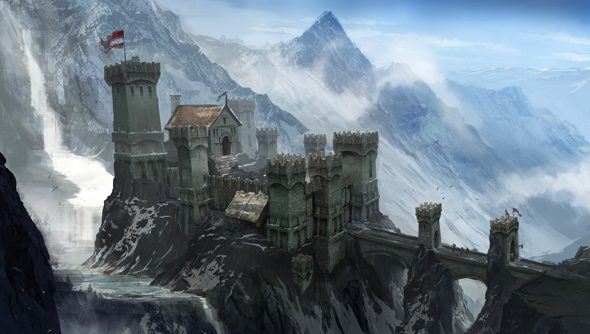 Can I say that this is a relief? The Witcher 3 has taken its series open-world, and that’s nice. But when it seemed Dragon Age would do the same, it wasn’t clear who the new custodians of the open-yet-directed RPG structure – perfected in Baldur’s Gate II and iterated on in several BioWare games thereafter – would be. And that was a little worrying.

Dragon Age: Inquisition will have some “extremely large” regions on its world map. But it won’t be Skyrim.

“Because everyone immediately thinks of Skyrim and assumes everything will be exactly like Skyrim,” he explained. “In our case, there are extremely large regions you can explore. It’s a multi-region game, which means that you’ll traveling with a world map. You’re traveling across this chunk of the continent in which the game is set.”

Each of these regions will be purposeful, said Laidlaw. Each will tie back to either the game’s central plot or its vaguer themes. The player might, for instance, discover that their enemies are particularly numerous in one area, and resolve to find out why.

“That means that they aren’t necessarily laden with story, because story is the antithesis of discovery, right? It tends to lead you along. But when you’re discovering things, you should feel like they’re part of the overall game and not random,” Laidlaw went on.

“I would say that it has elements of open world for sure,” he concluded, “but it’s something closer to the feel we had in the Baldur’s Gate games or in Origins, even, where it’s larger areas, big spaces, and the chance for you to move around and see a wide variety of different terrains and locales and so on.”

Will you excuse me? Somebody at BioWare remembered Baldur’s Gate, and I’m struggling to see through the happiness.

“The goal for me is that when you arrive in an area, you should be able to spin the camera and see a bunch of cool stuff that makes you say, ‘What’s that?’,” Laidlaw added. “And you start heading in that direction to identify it. And then over time, there can be reasons, or maybe you’re doing something for a companion or pursuing a lead or something like that, that will bring you back to spaces.”

Exploration, because reasons. Skyrim is great, you know? But Dragon Age: Inquisition isn’t it. And I think that’s probably more than okay.