In a different life I used to review console games, and one of the most interesting titles that vocation handed me was Dragon’s Dogma. Originally released on PS3 and Xbox 360 in 2012, it was a melange of eastern and western RPG maxims with enough new ideas to set it apart from both Dragon Age and Dark Souls. In January it makes its way onto PC, so I thought I’d dive into the pre-beta PC build and take a moment to show you why I like it so much. And, just so we’re clear, it involves cliffside murder.

Will Dragon’s Dogma: Dark Arisen become one of our best PC RPGs?

The other game that people describe in these same terms, like looking at western role-playing games through a Japanese prism, is Dark Souls. Dragon’s Dogma is not Dark Souls. It tells you what all its items do, features a relatively forgiving combat system, and is tonally far removed from From Software’s long silences punctuated by only sword strokes. It isn’t the least bit intimidating.

Combat does become increasingly challenging, and the Dark Arisen expansion in particular is ruthlessly difficult, but that’s not this game’s thing. No, it’s thing is being really, really strange. Almost dream-like. It explores conventions, plays with them, and as a result you’re never really sure whether to take it seriously. And that’s fantastic fun.

For example, very early in the game an NPC warns you not to leave the safety of the town walls at night without a torch, or you won’t be able to see the monsters – who, incidentally, regroup and attack with greater vigour after nightfall. “Whatever you say, cautious NPC,” you say, patting him on the head and leaving the town walls without a torch. Then you get out into the wild and it looks like this: 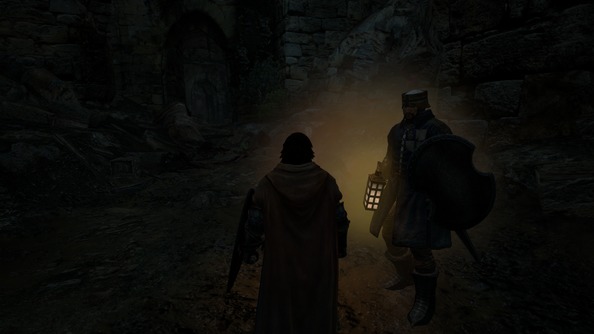 And then you get killed by all the monsters you can’t see. Obviously.

The jewel in DD:DA’s crown of strange, though, is the Pawn system. I’m amazed it hasn’t been stolen by other games and isn’t now considered a genre trope. It works like this: you make a companion using the ludicrously malleable character creation tool. That companion accompanies you through quests, helping out where they can by grabbing enemies and pinning them while you land the finishing blows. Or, if they’re a mage, they might buff your sword or hamper foes while you wail on them.

Here’s the clever bit: Pawns are a quasi-multiplayer feature. I can upload my Pawn into the game server, and you can summon them to fight alongside you. If you then embark on a quest that I already completed with that Pawn, they’ll remember how it was completed and offer advice along the way. They’ll tell you about enemy attacks and suggest the best strategy for defeating them. It might be the only game I’ve played in which the mid-combat party member banter is worth listening to.

Pawns are introduced early – in the game’s prologue, actually. Shortly after fleeing an enormous dragon, you’re introduced to this crew: 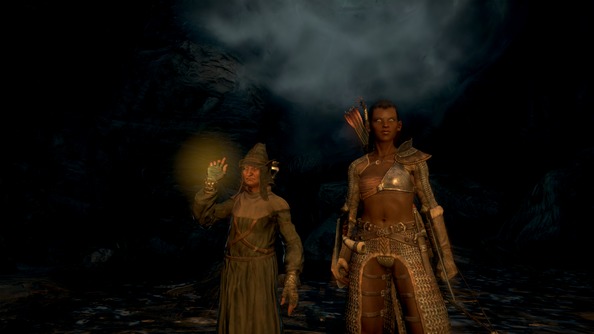 Look, I never said Pawns were easy on the eye. This pair arrive pre-made in the prologue purely to demo the system, but even when you’re able to sculpt your own later on the results are almost always unpleasant. Both male and female companions share the appearance of having been constructed from spare parts, regardless of how daring their armour choices. But then what can one expect of a creation tool in which one of the preset male characters so closely resembles a homeless Paul Daniels: 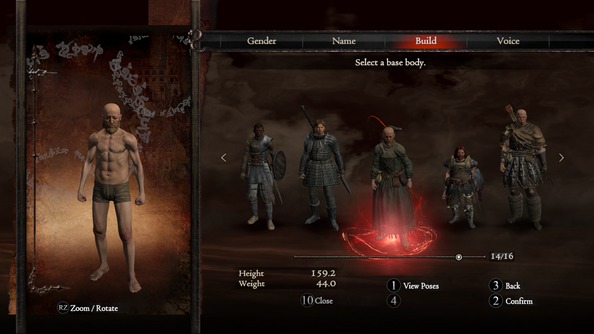 I digress. Immediately upon Quince and Salde joining forces with my prologue adventurer, we’re beset by a Chimera; half-lion, half-goat, and the third and final half that of a snake. It’s absolutely enormous, and serves to showcase another of Dragon’s Dogma’s little quirks: clambering all over ‘boss’ enemy types is absolutely essential.

See, if I were to hack away at the Chimera’s heels – the only viable hacking target from my standing position – I might eventually diminish its health bar with the help of my Pawns. While the victory may technically be mine, it wouldn’t be one to savour. However, by climbing up the Chimera and attaching myself to its snake-head-tail, I’m enacting a much more effective assault, quickly chopping the entire appendage clean off its body. 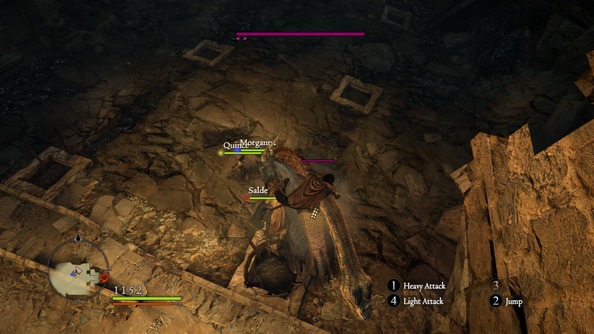 Meanwhile, my Pawns have been hard at work buffing me and attacking the Chimera themselves. “Go for the tail!” they advise, or “The goat head is dead.” The goat head is indeed dead, and now simply lollops about on the surviving lion’s neck while we go to town on what remains of it. One of the more memorable RPG fights in recent years, and it happens around five minutes into Dragon’s Dogma.

With all three halves of the fearsome Chimera lying dead on the ground of an ancient tomb, there’s time to assess how DD:DA has aged since 2012, and in its migration to PC. I’m playing a pre-final build, but I’m encouraged. Blurry texture resolutions and simple character models do tell the story of its last-gen console origins, but there’s a decent swathe of visual options in the graphics menu to boost those visuals all the way up into 2015 territory. The lighting model, which is used to great atmospheric effect throughout, looks every bit as good now as it did upon release.

But I didn’t come here and slay a Chimera to discuss anisotropic filtering with you. Instead, I wanted to re-enact one of my favourite memories of the game: throwing the population of its first town, a sleepy fishing village called Cassardis, off a cliff.

It demonstrates the tone of the game perfectly. Prior to being given full control of your character after completing the prologue, you’re taken through a bit of backstory in which you’re established as a humble denizen of Cassardis, and this girl is quickly established as your love interest: 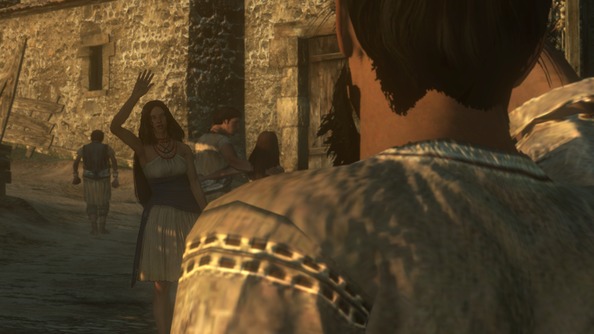 She has her eye on you as the two of you go about your everyday Cassardis business. When an enormous fire-breathing dragon arrives to scorch your lovely Mediterranean home to cinders, she holds her ground with you: 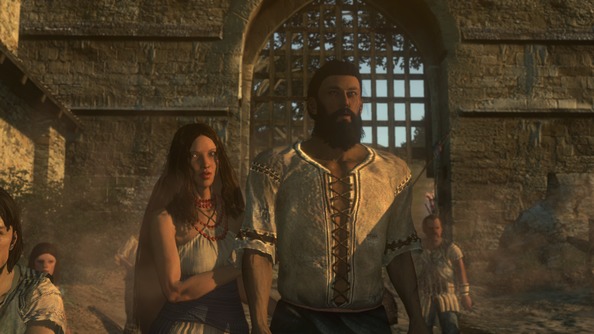 After said dragon attacks you, rips open your chest cavity and quite literally eats your heart, she’s there to nurse you back to health over a period of weeks (definitely possible). Lovingly, she pours flasks of water down your throat and feeds you to keep your strength up.

Then, after many days of recovery, you’re once again able to stand like the warrior you once were. The attraction – the love – between the two characters is palpable. 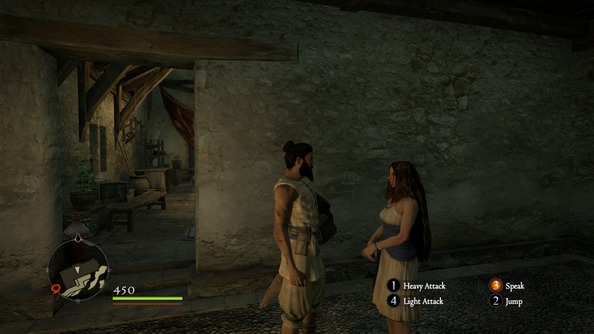 Until I exert my will on the story, at least. It takes this poor girl roughly 30 seconds to realise she has in fact been nursing a senseless murderer back to health. Bidding her a curt goodbye, I depart immediately for the Cassardis Cliffside to test the potential of a) my ‘grab’ action, b) an incredibly flexible set of rules and mechanics, and c) the unsuspecting village folk who walk the cliff’s edge. 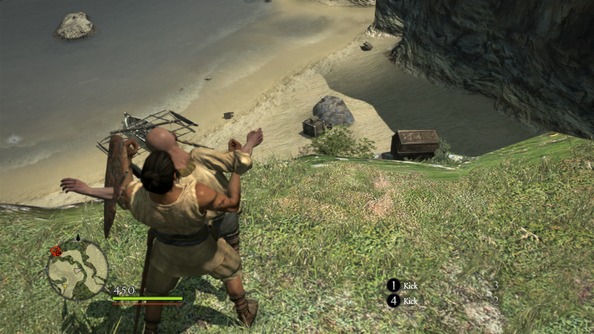 It was only going to go one way. Yes, my act is as immature as it is senseless, but it does convey a deeper truth about Dragon’s Dogma’s design philosophy: rather than being handheld from one spectacular set-piece to the next, you exact your will on its world. Good or bad. Logical or senseless. Your actions have real effects. Once this poor chap hits the bottom of this particularly scenic cliff, he stays dead.

In order to let that point, that profound truth, really hammer home, I step out a bit further towards the edge to watch him hit the bottom. Very quickly, I realise I’ve made a huge mistake. I’m now tumbling towards the same beach at a fearsome pace, not that far behind my victim. The result is pure poetry: 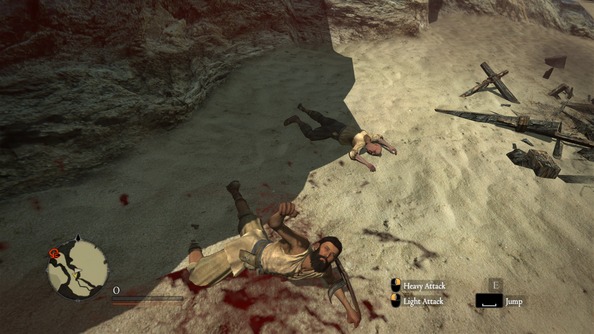 “Why, Phil?” he says with his eyes. “Why did we both have to die simply to demonstrate the malleability of this world? Couldn’t you have just gone on a few quests?”

Why, player-character? I’m not totally clear why anymore. What I do know is that this act of hubris rekindled my interest. I’m remembering all the things I never got round to doing on PS3. All the things I could have done differently. Several other spectacular cliffsides with NPCs in their proximity.

The game’s out, complete with Dark Arisen expansion and all the console DLC, this January, and I promise it’s way more exciting than a three-year-old console port has any right to be.