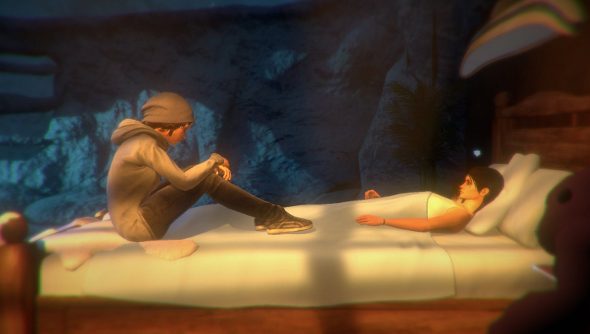 It’s been eight years since Dreamfall: The Longest Journey was released, ending abruptly with a bit of a cliffhanger. But Red Thread Games’ resurrection of the adventure series, Dreamfall Chapters, is on the horizon.

The first episode, Book One: Reborn, is due out this autumn. Take a look at the episode’s trailer below.

Red Thread announced that it would be splitting the game into episodes last week on the Kickstarter page. Originally planned to be one complete game, it has grown to be larger and more ambitious than previously planned, and with the original deadline looking less and less likely, the decision was made to split it up into five parts.

“We could have made deep cuts, removed a lot of the characters, story-lines and locations — but we would have ended up with a different game than the one that’s played inside our heads for the better part of a decade,” said Ragnar Tørnquist. “A different game than the one we’ve promised our backers. We would have lost much of the magic and narrative depth. And we would’ve still had to delay our release into next year.”

Reborn follows returning characters Zoe and Kian as they explore their respective worlds. Kian’s from Arcadia, the magical world, while Zoe is from Stark, which is our dimension, but many years in the future. About a year has passed since the events in Dreamfall: The Longest Journey, so at least we won’t have eight years of catching up to do.