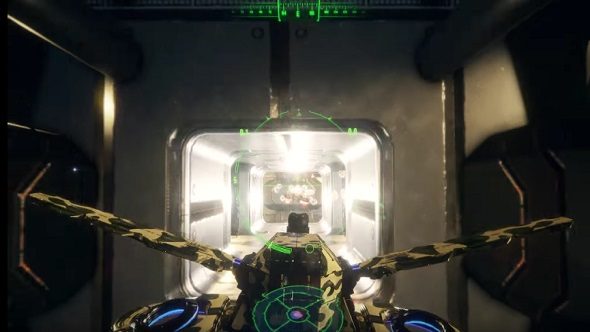 After announcing its remote controlled arena shooter back in December, Five Studios Interactive have released the first gameplay trailer for Drone, showing the game’s vehicular combat in action. As the name suggests, Drone has you piloting small remote control flying machines which can be fully customised with different propulsion systems, weapons and gadgets to fit your playstyle.

For more fun with guns and ammo, check out these great PC shooters.

While the trailer shows off a standard Team Deathmatch game, Drone prides itself on the ability to customise not only your drone, but the game mode and map you decide to play on. This trailer shows off a map created using Drone’s arena editor; a tightly packed military base with plenty of narrow corridors and air vents to dive into, which then opens up into a massive jungle area with grass to hide in and trees to dodge past.

If combat isn’t your thing, you can just race drones on specific courses, thanks to Drone’s unique ruleset editor. So far, Drone only has simple game types like Team Deathmatch, Capture the Flag, races and a mode called Powerball, which has drones fighting for control of an energy ball, which can be bounced off walls to try land in an opponent’s goal.

The map editor is planned to have weather settings, the ability to change a map’s gravity along with cool player controlled visual effects, like a moon blocking out the sun to darken proceedings during a race. You can even customise the spaceship which holds all your drones, creating your own drone hanger to fly you from map to map. There is also a heavy focus on environmental destruction in the trailer, with bullets shredding holes in metal rails and missiles causing large craters in the ground upon exploding.

Drone sounds like the perfect game for those who love tinkering with every aspect of their character, but it looks like it’s going to be quite a while before anyone gets their hands on it. Looking on the official Drone website, the studio is currently preparing for the game’s debut on Steam Greenlight, as well for its upcoming Kickstarter campaign. If you are at all interested in Drone from its gameplay trailer, feel free to sign up to its mailing list to find out when it launches on Steam Greenlight and Kickstarter.