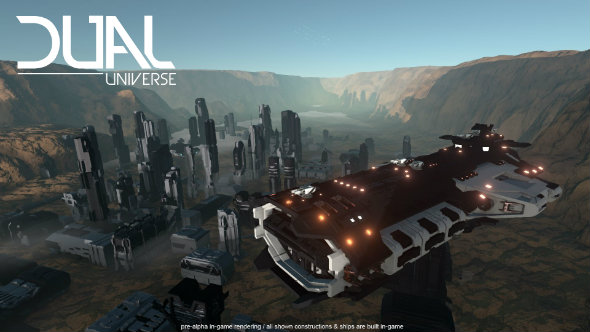 Occasionally a videogame comes along that leaves you a bit lost for words. Dual Universe is one of those games. It’s a project with such dizzying ambition that had the developers casually mentioned that they were planning to build a server centre on the moon I wouldn’t question their intent. It is, without a doubt, the most far-reaching MMO in development today.

Looking to lose yourself in a new world? Try a great MMO.

As I sit down with Novaquark’s founder and president Jean-Christophe Baillie, he points out that what I’m about to see is his vision. They’re already well on the way to achieving much of it, but such dreams are not always promised realities. Nevertheless, Baillie seems to truly believe that the vision is within grasping range, in part thanks to the company’s heavy investment in new technology.

It’s as big as an MMO can be

“When we started the company we asked ourselves if we could create a technology that makes having tens of thousands of players gathering in a city possible,” says Baillie. “It would open possibilities for immersive gameplay and allow players a collective story that has never been seen before.”

After much investment in research and development, Novaquark have created a server technology that uses a ‘continuous single shard’: a world that contains every single player. “There are no instances. There are no local servers or things like that,” Baillie explains. “We don’t have any zones to transition to, everything is continuous. This is a massively multiplayer online game and we’re getting back to the root of what that means.”

This single shard is the technology upon which a gigantic universe will be built, filled with galaxies, stars, and planets. Akin to No Man’s Sky, this universe will be procedurally created. “We don’t have any problem with generating millions of planets. This is not a technical challenge,” says Baillie with confidence. 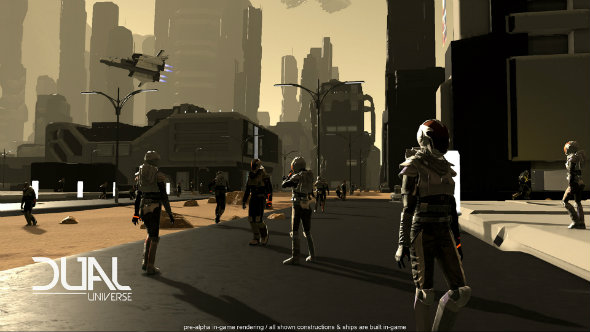 But what do you actually do in this huge universe? The first word that comes to mind is ‘live’. Dual Universe is not a traditional MMORPG; there are no quest givers, no scripted story sections, and no dungeon raids. Instead it’s a blend of Minecraft and Eve Online; a place where players dictate the ebb and flow of things, and decide the future of the universe.

“Everyone starts from the same place: the ark ship,” says Baillie. “You start to expand from there. The idea is that to get to the next planet in the solar system you need to unlock warp drive technology, which will take some time, and then to get to other systems you’ll have to unlock stargates.”

In standard videogame language, ‘unlock warp drive technology’ sounds like a pretty simple endeavour. But in Dual Universe it’s not as simple as completing a quest and getting the tech as a reward. This is a game about building civilisation. These things need to be discovered, created, and shared.

That’s where the game’s Minecraft elements come into play. You’ll excavate raw materials, then use them to craft the tools society needs. There are a collection of items in the game that can be made according to developer-made specifications, but the majority of things players will create will be their own voxel-based designs. Think of it like the block-laying systems in Minecraft, but with far more possibilities in terms of shape.

As an example, Baillie shows me a monumental space station that looks like something from the special effects reel of an early ‘80s sci-fi. “Suppose you want to build this thing. It’s probably going to involve thousands of players for many months, perhaps even years, just collecting raw materials, engineering it, organising the security of the building site, and so on,” he says. “This will actually create jobs or quests for people in the game which are completely emergent from what the players really want.”

You can create your own capitalist society 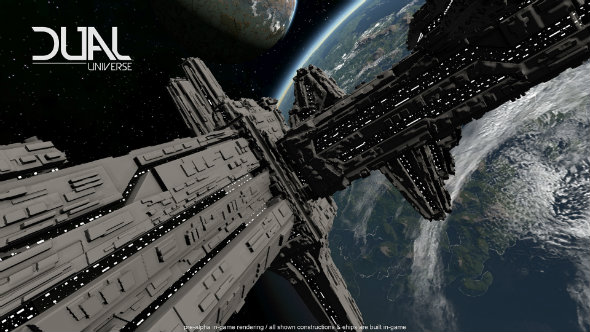 Manufacturing opens the door to something very important: trading. Not a pre-baked, NPC-governed shopping system, but a true economy. “The economy is extremely important because it will act as a way to connect different people with different interests, and lead the players towards specialisation,” Baillie explains.

Say, for example, you have a player who’s very adept at crafting spaceships. They can make a living out of creating and selling ships to players who are either less skilled or simply disinterested in crafting.

It goes further than simple buying and selling, though. “You could have different layers in the process, like some people design and sell the blueprints for spaceships, some others are buying the blueprints and they have the infrastructure to build them. And some people are good at selling or transporting,” says Baillie. “Guys in transport will probably buy cargo ships so they can transport mini ships.”

That’s right: Dual Universe requires that everything exists in physical space, so if you want to buy a ship you’ll need to visit a dealer. And for a dealer to have stock, they need to import from a factory. The opportunity to find your own niche and make money is seemingly limitless.

And it doesn’t stop there, either. Your specialisation could be as simple as being a space trucker, but the smartest players can become true technology innovators. Dual Universe supports Lua scripting. There’s an automatic system that creates scripts for the things you bolt together yourself, meaning DIY spaceships will fly, but if you know how to code then the sky’s the limit. “You can do automatic AI control for a ship,” suggests Baillie. “A few people will be good at that. They will probably make things that people like, and they will spread on the market. So at some point everyone is going to benefit from a small minority of players scripting.”

Collaboration can change the universe 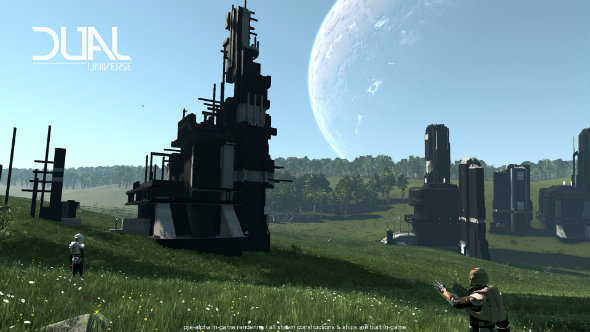 As Dual Universe’s civilisation of players grows, they’ll expand their reach through the universe. Warp drives will allow you to reach new planets where you can settle and build new structures, or simply mine it for resources and move on. But in a universe this size warp travel will only get you so far. To truly explore, you’ll need galaxy-hopping stargates.

“You will have to make the stargates, there’s no alien civilisation that left that tech. It’s going to be a big, big endeavour to create a network of them,” says Baillie.

Creating gates requires a probe to be launched into deep space. It can take numerous real-time weeks for a probe to complete its journey, but when it arrives you’re able to do a single jump to its location. With the gate built, it will link into the network and enable interstellar travel over great distances.

And if you’ve built a stargate, you can dictate how it’s used. Perhaps you want to create something for the good of the people, so you could leave it freely open. But it can also be a money-making venture. “Some stargates could be private for organisations, and some could offer access the network for a fee. So the business will be to build the highway of the galaxy,” says Baillie.

“We don’t aim for instant gratification. We want achievements,” Baillie explains. “We are exploring the world. It’s difficult, it’s interesting, and we need to work together. This is something we need to push.” It’s something that’s apparent in their release date: Novaquark are aiming for a late 2018 window for the first version of the game. In this industry that’s light years away, but this isn’t the kind of project you can gain instant gratification from. For Novaquark to realise their ambitions, it’s going to take a lot of time and hard work. In many ways their task seems impossible, but they’re determined to see it through. It’s going to be fascinating to see just how much they accomplish over the next two years.