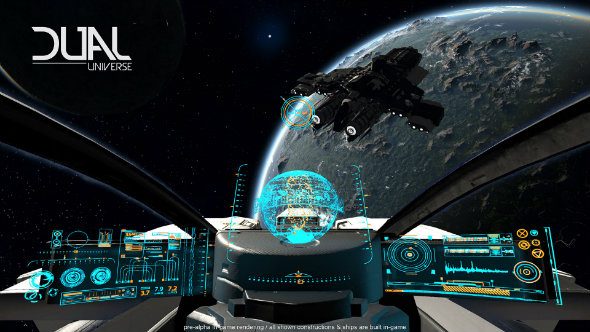 Dual Universe just launched on Kickstarter and it looks to deliver on the dream of the seamless, intergalactic MMO that’s so in right now. As ever with the current trend of space games, it’s very ambitious but, if it manages everything it’s aiming for, this could be something special indeed.

If you find it relaxing to drift through the infinite blackness, check out our list of the best space games.

Using their own technology, developers Novaquark aim to create a huge sandbox world, shared by all players at the same time, with no instances, no zones and no transitions. You’ll be able to modify the voxel-based world, creating massive skyscrapers on planet surfaces, or building a Death Star-style space station in orbit above. Players will be able to work together to create intergalactic empires.

“Because with innovation comes risk, most publishers don’t take the chance to support creative projects like Dual Universe. The game is a revolutionary take on the MMO genre, enough to make it difficult to finance by conventional means. For the past three years we have been funded privately, keeping our independence to develop ground-breaking technology,” says Jean-Christophe Baillie, founder and president of Novaquark.

“To complete our vision, we need the community’s support for Dual Universe, in order to remain independent and move forward in the direction of the game we all want to make. The more backing we will have, the stronger we will be, and the more independent we can remain.”

The Dual Universe Kickstarter is seeking $500,000 to add to Novaquark’s own investments, with tiers offering alpha and beta access, as well as heavily discounted subscriptions upon release. The alpha is due in 2017 and there’s a bunch more information, videos and screenshots on the official site. It looks lovely.

For now, watch one of the developers build himself a spaceship: