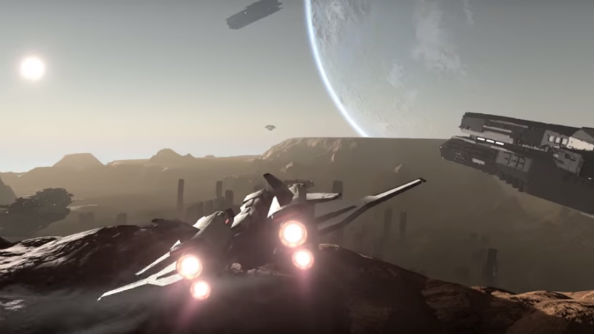 A persistent, shared universe where players are free to create to their heart’s content. It sounds like a list of gaming buzzwords, but judging from the game’s first reel of in-game footage there’s plenty to be excited about.

The brief teaser managed to cram in a glut of details about what Dual Universe has to offer gamers that they won’t be able to fill their boots with from other MMOs and space games. Starting with a player adding a couple of additional modules onto a spaceship before boarding, zooming around a planet, blasting into space, entering the atmosphere of another planet and landing smoothly on terra firma. Watch the trailer below.

Promising all of that is one thing, but in a single-shard universe that’s shared for all players is something else entirely. Developer Novaquark revealed the footage at the PC Gamer E3 2016 show, where they also revealed their ambitious plan to have a playable alpha ready for early 2017.