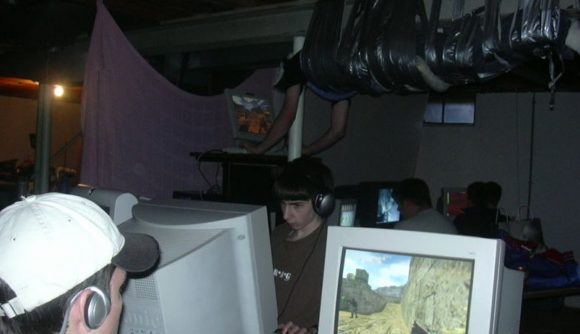 The duct-taped gamer is one of the most enduring memes in gaming. So many questions: how did he get there? What was his kill:death ratio? How did he pee? A new documentary is going behind the myth to answer all of these, and more.

Narrated by Mark Hamill – well, OK, using audio of his performance as Luke Skywalker, but still – the trailer for Internet Legends: Duct-Taped Gamer promises a deep-dive into the background of the legendary picture. Featuring interviews with many of the players in that room, including the man himself – named Drew Purvis, by the way – and more shots of the LAN party in question and context behind him becoming stuck to the roof, it looks to be a fun glimpse into a bygone era in competitive gaming.

If you’re unaware, the image in question, viewable in this article’s header, is of a player in a Counter-Strike LAN game who’s playing while duct-taped to the ceiling of the basement they’re all inhabiting. The picture surfaced in the early-to-mid 2000s and went viral on a pre-social media internet, representing a time before broadband made multiplayer between a bunch of mates extremely easy.

Needless to say, a lot has changed since then, but Counter-Strike’s popularity certainly isn’t one of them. The all-time concurrent players record has been broken several times this year, and it’s now filling arenas around the world as one of the leading esports.

PC gaming has evolved out of cramped basements filled with wires and stinking of sweat and pizza, but anyone who remembers such a time will no doubt have some nostalgia for it. If nothing else, this documentary should be a gentle stroll down memory lane.

Internet Legends: Duct-Taped Gamer is due out this year – you won’t need any duct-tape to enjoy the games on our lists of best FPS, best co-op, and best multiplayer games.