It’s been well established that Dark Forces is one of the greatest Star Wars games of all time, if not the greatest, but we’ll be the first to admit it still has some problems as an FPS. Duke Nukem 3D, for example, has had more updates over the years so it runs smoothly on modern PCs, has better mouse controls, and you can actually save mid-mission.

Wouldn’t it be great, then, if someone went and put Dark Forces into Duke Nukem 3D – perhaps with whole new levels, and maybe with Jedi Knight-era Force powers and even a lightsaber? Well, someone has – the Duke Forces mod for Duke Nukem 3D, which brings a lot of Star Wars into the game.

The mod’s actually been around for a couple of years now, but just received a big update this weekend in time for its second anniversary on Star Wars day (May 4th). The update makes the total conversion mod feel even more Star Wars-y – with new themed sprite replacements, a Sith enemy to lightsaber duel with, and improved Dark Forces sprites.

The Duke Forces mod – which you can pick up here (thanks DSO Gaming) as long as you have any copy of Duke 3D’s Atomic Edition – brings a lot of both Dark Forces and Dark Forces II: Jedi Knight to Duke Nukem 3D… then mashes them all up. You play as Duke after the end of Duke Nukem 3D, who goes through a portal into the Star Wars universe. Alongside direct imports of Dark Forces enemies such as Stormtroopers and Trandoshans are classic Duke aliens and new enemies such as Droidekas. Then Duke gets a lightsaber and Force powers, and it becomes the greatest Star Wars game ever made. 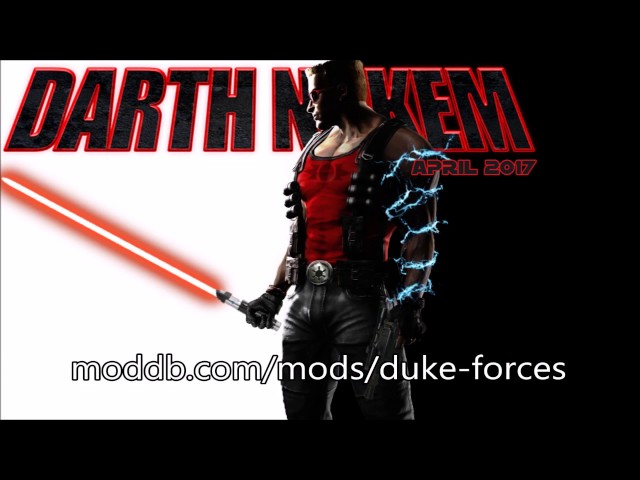 As mentioned, the newest update was released this weekend and brings Duke Forces up to version 2.10. There are new Star Wars-themed sprites by modder sebabdukeboss20, who created the popular Alien Armageddon mod, and a much-improved Sith enemy to duel with. There’s also a new map, ‘Shocking Twist’, and the classic Dark Forces sprites have been upscaled with neural network tech to make them more attractive. It’s all incredibly impressive.

Like this too you will: check out the best Star Wars games on PC

One thing Duke Forces isn’t, however, is a pure remaster of the original Dark Forces. There are several of these potentially in the works, including a full Unreal-powered remake and a potential re-release tweaked by Nightdive. Until either of these happen, however, Duke Forces may be the best way to experience the full power of Star Wars Dark Forces.