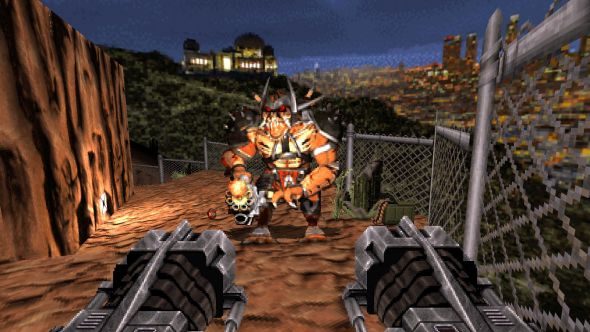 Update August 26, 2016: A post on Reddit, including screenshots, says the new Duke being announced in a week is a remake of his best game.

Duke Nukem 3D: World Tour is the apparent name of the upcoming Duke title according to a post on Reddit. While not usually the strongest source, it also came with screenshots of the apparent remastering of Duke’s third and most popular outing, one of which you can see above.

According to the post, made by user Tezla55, “somebody” leaked details of the game to them, which is being developed by Nerve Software. They’re an FPS developer who’ve helped on recent Call of Duty games and did porting work in the past for id. Notably, they also developed the Doom 3 expansion Resurrection of Evil. Their website is currently down.

Tezla55 also says the game will feature “co-op as well as deathmatch” online and will have “a lot of new/original content” to make it more of a “remix” than a remaster. Based on the imagesit’s still using older assets and engine tech spruced up a bit for modern PCs, rather than fully new 3D models.

On the skeptic side, this could rather easily be a fake. The logo wouldn’t be the hardest photoshop in the world, and the name of the game was already leaked by the Twitter account shananigans detailed below, as well as this linkwhich will take you to a test version of the post-countdown site.It’s possible the screenshots are simply from an old graphics mod, or similarly photoshopped to look a little higher-rez.

That said, given the 20th anniversary dressings and that Gearbox would likely want to test the waters with something Duke-related to see if the franchise was worth investing in, it’s not out of the realms of possibility. Countdown’s got another week on it – let the speculation continue. 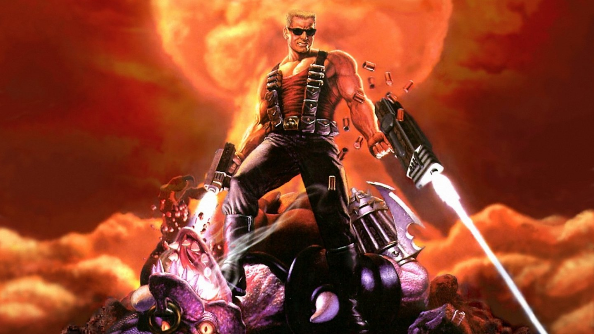 Original story August 25, 2016:Alright, here we go again. Duke Nukem has been officially dead, buried and forgotten since the inevitably disappointing and really quite poor Forever was finally released in 2011. Bombshell was originally to be a Duke game until legal issues got in the way, and its been assumed that even owners Gearbox weren’t interested in doing anything more with the maligned franchise. Not so – there’s a new site, a social team and a 20th anniversary countdown pointed at the night of Friday, September 2.

So, it all starts with the new official site. Make it through the gauntlet of the age checker and you’ll be presented with the 20th anniversary banner and the countdown. The exact time this is going for seems to be 1:30am BST, September 3, which is 5:30pm the previous day Pacific, and 7:30pm at the Gearbox offices in Frisco, Texas.

An odd time to pick, but it’s definitely Gearbox branded, at least in the copyright information at the bottom of the page. The date isn’t the 20th anniversary of anything related to Duke either, though Duke Nukem 3D was released in 1996, so they might just be going on year. Also in the copyright is the term “Hail to the King” – possibly a name for whatever’s being announced?

As for the social accounts, Duke’s Facebook page reactivated after more than four years out of action, while he’s also popped up on Instagram and Twitter. Oddly enough, the Twitter link on the home page points to @DukeWorldTour which seems to have been deleted. Could be another hint at a possible name, or simply a mistake.

As for what the game might be, well, who knows eh? Duke’s probably involved, but it could be anything – a remaster or remake of 3D, a re-release of Forever or a whole new game. Duke Rising was a prequel that was in development for some time before being cancelled way back when, so maybe a revival of that idea?

I’m interested to see what they do with it. Even if it becomes total vaporware again, well, honestly the jokes about Half-Life 3 are starting to get repetitive so we could use it. We’ll find out more in a week and a bit. You can sign up for updates, whatever that means, on the official site.