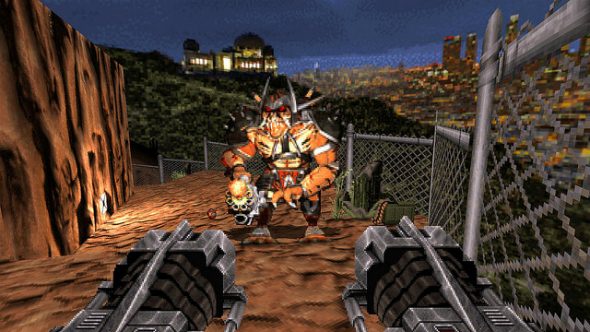 It’s time, once again, to kick ass and chew bubblegum regardless of the amount of bubblegum currently on your person. Duke Nukem’s back in the future of the past with a remastered re-release of his 1996 classic as Gearbox get the old gang back together to fix Duke up with a new look and sound.

Check out these other classic PC games that could use the same loving.

Duke Nukem 3D: 20th Anniversary World Tour is everything you remember about the original FPS but made betterer by the work of many of the original team.

On top of fresh graphics true to the original engine in True3D Rendering mode, there are eight additional levels in an all-new episode from original level designersAllen Blum III and Richard “Levelord” Gray.

There’s also rad new tunes from composer Lee Jackson, and of course some more never-before-heard one liners from Duke himself, Jon St. John.

While you might like all that spangly new content in your Nukem, it’s also possible to swap back to the original engine on the fly and see whatever you were squinting at in the mid-nineties.